Franklin D. Roosevelt was our 32nd President. While best known as our longest-serving President, for bringing about large-scale civil works programs to get us out of the Great Depression, and leading the country through World War II, numismatists remember him for Executive Order 6102, issued in 1933, which made it a criminal offense for U.S. citizens to own or trade gold anywhere in the world, with exceptions for some jewelry and collector’s coins, resulting in decades of problems surrounding ownership of 1933 Saint Gaudens Double Eagles. 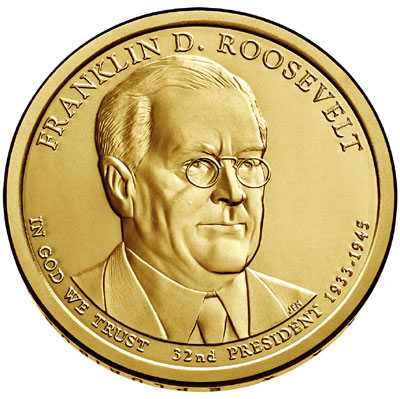 The coin bearing President Roosevelt’s image is the thirty-second in the series of Presidential Dollar coins, and the fourth and final to be issued in 2014. The obverse depicts Roosevelt, the time in office (1933-1945), and the motto “In God We Trust”. The reverse shows the Statue of Liberty in the same design as been depicted on all Presidential dollars. The edge has the motto “E PLURIBUS UNUM”, the year of issuance, and the mint mark.

The Franklin D. Roosevelt Presidential Dollar will be released on August 28th, 2014. As Presidential Dollar coins are still being produced under the Treasury Department’s suspension of production of the dollar coin for general circulation, they will only be available directly from the U.S. Mint in the following products: