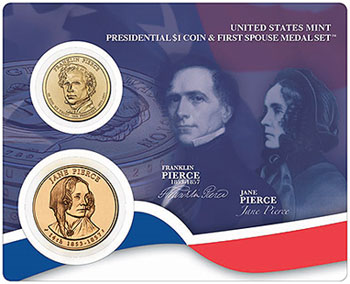 The $1 coin and medal are mounted on a durable plastic card with an illustration of the President and First Lady on the obverse and issuance information on the reverse. Each set is priced at $11.95 pluss application shipping and handling charges. Orders may be placed at http://usmint.gov/catalog.

A similar set has been issued for each release of the Presidential Dollar coin series. Previous releases remain on sale featuring John and Julia Tyler, James and Sarah Polk, Zachary and Margaret Taylor, and Millard and Abigail Fillmore.