The Monnaie de Paris has launched (21st March) a new numismatic series chronicling the travels of France’s favorite Petit Prince, based on the novella by Antoine de Saint Exupéry (1900 – 1944). The release of this most recent series of “The Little Prince” coins coincides with the 70th anniversary of the story’s publication in France in 1946.

Antoine de Saint Exupéry was a French poet and aviator who made his first flight in 1912, marking the beginning of his passion for aviation. He studied architecture until his French Air Force service began in 1921 in Strasbourg. A 1923 plane accident in Le Bourget demobilized him, and it was at this time that his writing career began.

In 1931, he published his second book, Vol de nuit. From 1932 on he focused on writing and journalism, occasionally reporting on major events, while also remaining a test pilot and raid pilot. In 1939, he served as a captain in the French Air Force and was recruited for service in an air reconnaissance squadron. During the Armistice, he left France bound for New York with the aim of enlisting or convincing the Americans to enter World War II. He wrote Le Petit Prince in New York City during this period.

In April 1943, Saint Exupéry returned to duty in aviation and was stationed in Tunisia. In the spring of 1944, he joined a unit in charge of photographic reconnaissance in preparation for the Allied landings in the south of France. Sadly, Saint Exupéry did not see the liberation of his country, having died after crashing his plane at sea on July 31, 1944. The plane was not found until 2000.

Le Petit Prince was originally published on April 6, 1943 in the United States and has sold more than 150 million copies around the world. It has been translated into over 270 languages, and has been described as a book for children written for grown-ups, as it can be read on many different levels to provide pleasure and food for thought for readers of all ages.

The fanciful story begins when the narrator, who is an aviator, crashes with his aeroplane in the middle of the Sahara desert. While he is trying to repair his aeroplane, a little boy — the Little Prince — appears and asks him to draw a sheep. The author learns that the Little Prince comes from asteroid B-612, where he has left behind three volcanoes and a rose.

The little Prince has had extensive travels before reaching earth, having visited other planets and met some very odd people, such as a king, a conceited man, a drunkard, a lamplighter, and a geographer. Since arriving on earth, he has communicated with a fox who has taught him “that to know someone or something, you must tame them, and that makes them unique” further teaching that “what is essential is invisible to the eye,” according to the fox.

The coins, which are sold as face value pieces, range from 10-euro silver pieces to 250-euro gold issues, with the first series consisting of twelve 10-euro coins, four 50 euro silver pieces (with two colorized versions of the 50-euro coins), and one gold coin. The second series, available later in 2016, includes the same numbers and varieties.

The Little Prince and its author were highlighted on France’s last legacy franc-denominated bank note series. The 50-franc note originally issued in 1997 featured a portrait of Saint-Exupéry on the obverse, along with a rendition of the Little Prince. The story has been made into a feature length anime-film that was released last year and has served as the inspiration for a “Petit Prince” theme park of 23 hectares located in Alsace. 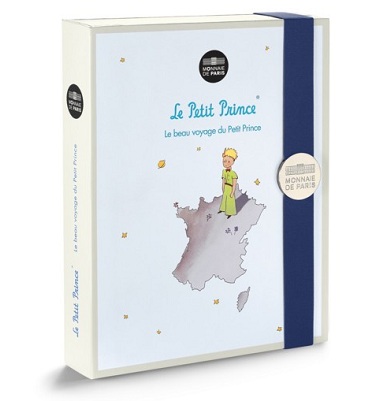 For the 2016 The Beautiful Journey of the Little Prince series, an exclusive box has been developed to preserve and organize the coins. Its format is inspired from the original editions of the book, and from the travel notebooks that are used by the greatest explorers. A navy blue elastic band can be used to keep the box closed and includes a clasp engraved with the logo of the Monnaie de Paris.

For more information on this and other coins offered by the Monnaie de Paris, please visit their Web site. Information is offered in English and French, with international orders dispatched where applicable.