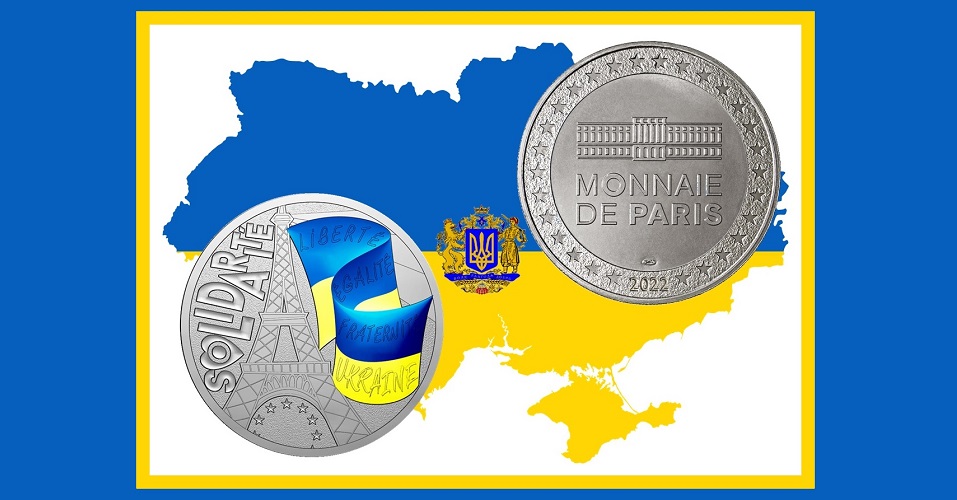 In the wake of the invasion of the Republic of Ukraine by military forces from the Russian Federation, which commenced on the 24th February, the Monnaie de Paris is honouring and remembering the people of Ukraine. They have produced a medal in which the proceeds of its sale will benefit the French Red Cross and, as such, relief supplies and funds will be channelled to support Ukrainian refugees fleeing their country as Russian soldiers push forward to occupy their cities and towns.

The Ukrainian Republic is no stranger to Russian aggression. In fact, in February 2014, the Crimean peninsula was annexed just as the former Kremlin-backed president was overthrown by the Ukrainian people, only to seek exile in Moscow. Currently, the capital Kyiv is under siege and is being bravely defended by both Ukrainian soldiers and civilians alike. Loss of life has been reported while countless protests worldwide are being staged against the Russian government, demanding a halt to the senseless aggression being perpetrated towards an innocent civilian population.

The CEO of the Monnaie de Paris, Mark Schwartz, posted a message of solidarity and support to Ukraine with the words:

The Ukrainian people are fighting with courage to defend their freedom. This freedom is our freedom. This courage commands admiration. That is why at the Monnaie de Paris we have decided to join the movement of solidarity with Ukrainians that is being born in Europe.

The front of the medal depicts a special message from the people of France to those in Ukraine: The Eiffel Tower proudly displays the bi-colour Ukrainian flag. The flag also features the French motto “Liberty, Equality, Fraternity,” a motto that resonates beyond France’s own borders as a collective message of peace and humanism. This mobilisation of defence forces and public support is not limited to the borders of France, but is a collective and community momentum symbolised by the stars of the European flag at the foot of the Eiffel Tower.

Those who would like to show whatever support they can are urged to contribute to their own country’s Red Cross foundation as supplies and funds are being channelled to relief efforts. The medal produced in cupro-nickel and colour reminds us all to stand together with Ukraine. 80% of the purchase price will be directed to the French Red Cross for their own support efforts benefiting Ukrainian refugees. For additional information, please click here.

France: 20th anniversary of the release of the euro features on new silver and gold rectangular Proof coins