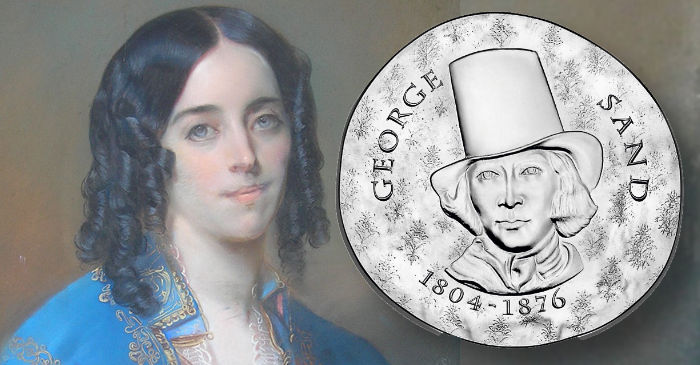 The Monnaie de Paris has launched (4th May) their third and final coin for 2018 in the successful series entitled “Women of France,” which tells the stories of notable French women who have shaped and influenced France from the first millennium to the current decade. The latest coin highlights the life of author George Sand, controversial in her day for her political views, her ability to develop a successful career in the middle 19th century, and for her romantic relationships which often became public matters. Sand adopted a male pseudonym and wrote under this name for a national newspaper, eventually becoming a published author of noted popularity.

Known simply as “Aurore” in her early childhood, Sand was born Marie-Aurore de Saxe, Madame Dupin de Francueil (1804-1876) in the city of Paris. She was later brought up at her grandmother’s estate, Nohant, in the French province of Berry. Sand used the splendid setting of her childhood in many of her novels. Her upbringing was quite liberal and in some ways, ostentatious. Her father, Maurice Dupin (1778–1808), was himself the grandson of the marshal general of France, Maurice, Comte de Saxe (1696–1750), an illegitimate son of Augustus II the Strong (1670–1733), king of Poland, and a Saxon elector. Sand was a cousin to the sixth degree to the brother-Kings Louis XVI, Louis XVIII, and Charles X of France, and was also related much more distantly to King Louis Philippe of France through common ancestors from German and Danish ruling families.

On the 10th December 1822, at the age of 18, Sand was married to Casimir Dudevant (1795–1871), who was the illegitimate son of Baron Jean-François Dudevant. She and Dudevant would become the parents of two children: Maurice (1823–1889) and Solange (1828–1899). However, by early 1831, Sand would leave her husband and children to embark on a four or five year period of “romantic rebellion,” and by 1835, she would become legally separated from Dudevant and took her children with her.

Known to have been a woman with strong political convictions, she managed to embark on an actual career at a time when it was unthinkable, perhaps impossible, for a woman to work during the 1830s. Aurore Dupin began her working life as a journalist for Le Figaro newspaper. George Sand counts among the most influential writers of her time. A strong advocate for women’s rights, she was also committed to the revolution of 1848 which returned France to a republic, the third in its modern history. Moreover, George Sand prodded French society due to her hectic love life, her masculine dress code, and her masculine pseudonym which she adopted. She became an active contributor to the intellectual life of this artistic and creative society and was very close to influential artists such as, Honoré de Balzac, Gustave Flaubert, Eugène Delacroix, Victor Hugo, and particularly, Frederic Chopin — with whom she had a seven-year relationship. Sand died in Nohant Castle at the age of 72 years and was buried in the private graveyard behind the chapel at Nohant-Vic, survived by her two children. Her son Jean-François-Maurice-Arnauld Dudevant later adopted the pseudonym Maurice Sand and became writer, artist, and entomologist.

The coins in the set include a €200 gold, €50 gold, and €10 silver pieces, and they all share the same obverse and reverse designs. The obverse depicts Aurore Dupin as her alter-ego, George Sand, who is wearing a masculine outfit with top hat and is surrounded by the years 1804 – 1876 and her name. In the background, we can find a tapestry originating from the Nohant Castle, the writer’s house that was acquired by her paternal grandmother.

The reverse includes portraits of George Sand and Frederic Chopin during the time when they were in a relationship together. The depiction was inspired by Delacroix’s painting of the couple. In the background, there is a music score composed by Chopin during the same time in history.

Available starting on the 22nd May, the coins dedicated to the life of George Sand are part of a three-coin issue for 2018 and the series entitled “Women of France,” which includes coins honouring Josephine de Beauharnais (1763-1814) and Désirée Clary (1777-1860). Each coin is available as a separate purchase. The Proof-quality coin is encapsulated and housed in a branded Monnaie de Paris custom case along with a numbered certificate of authenticity. For additional information on these coins and others available from the Monnaie de Paris, please visit their website.