The Monnaie de Paris have announced the upcoming issue of new coins in their ongoing series entitled “The 7 Arts.” Every year, this popular series introduces an art genre, an artist, and a particular place relevant within the arts community. The first coins in the series debuted in 2013 and paid tribute to the art of dance, featuring the eminent ballet dancer Rudolf Nureyev and the venue the Opéra Garnier. The coins’ design consultant is the eminent French fashion designer Christian Lacroix, who has overseen each design in the series. The 2017-dated commemorative and collector coins in the 7 Arts set are in tribute to the discipline of sculpting, and in particular to one of France’s most celebrated sculptors, Auguste Rodin.

The bimetallic and silver obverses.

The coin’s design is the work of Joaquin Jimenez. Rodin is seen in profile at the time of the creation of his most famous work, The Thinker, which is depicted to the left of the artist utilising a “zoom” effect. The style of the design is inspired by the sculpture itself and imitates the shaping of the material, clay or marble—or in the case of Rodin and this specific work, metal. At lower right on the obverse is a facsimile of Rodin’s signature. The commemorative years 1917–2017, with 1917 representing the year of the sculptor’s death, also appear on the obverse. In the case of the bimetallic coins, the dates appear at lower right after the signature; on the silver coins, the dates appear at upper right.

The reverse of the silver coin shows the face value surrounded by two branches (oak and laurel), arranged to evoke the euro symbol. The entire reverse motif is framed in a hexagonal design representing the stylised geopolitical shape of France. The reverse design for the €2 is the common reverse utilised for all eurozone circulation coins: a map of the eurozone along with the numeral 2 and the word EURO superimposed over the map.

The coins are available from the 21st February, and, with the exception of the Proof and Brilliant Uncirculated versions of the €2, will be offered at their face value. Christian Lacroix will highlight the major French sculptor with a €10 silver Proof and €50 gold Proof coins, to be launched in November 2017. For more information on these and other coins offered by the Monnaie de Paris, please visit their website.

Auguste Rodin was born on the 12th of November 1840 in Paris, and is considered one of the greatest French sculptors. He influenced this discipline with the expressivity and the sensuality of his works. At the age of 14, he integrated to the École Impériale Spéciale de Dessin et de Mathématiques, where he was taught the essential basics and traditional techniques of drawing and sculpture. He tried several times to join the Ecole des Beaux-Arts of Paris without any success, before working for decorators and craftsmen. 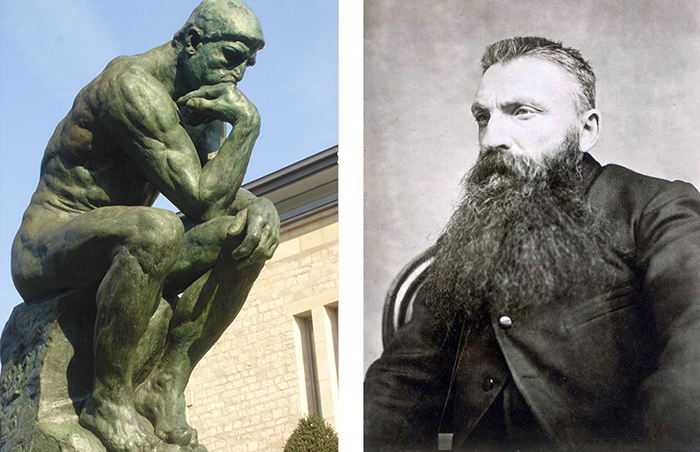 The Thinker, at left, and a photo of the artist taken around the time he was creating his most famous sculpture. (Wikimedia photos)

In 1860, Rodin created his first sculpture, which was a bust of his father. Four years later, he met Rose Beuret (1844–1917), who became his lifelong partner. In 1877, he prepared his first major piece of art, a life-size statue of a young man; it was this piece that would launch the beginning of both his recognition and his monetary wealth as a sculptor.

Among all of his works, the piece of art most closely associated with Rodin is The Thinker. This piece was part of a commission from the Museum of Applied Arts for a monumental gate based on Dante’s Divine Comedy: the Door of Hell. Rodin chose to present Dante, author of the Divine Comedy, leaning forward in order to observe the circles of Hell whilst at the same time, meditating upon his work. While keeping its position of relevance and importance within the monumental gate, The Thinker was also exhibited individually as of 1888 and therefore was considered an individual work of art in its own right.  The original model, produced in 1880 in plaster and measuring 71.5 centimetres (or almost 28 inches) in height, was exhibited for the very first time in Copenhagen in 1888. The first bronze cast was finished in 1902, and since then more than 20 castings of the sculpture have been produced, most of them while Rodin was still living. They are located in museums around the world.

Auguste Rodin died in 1917 and is buried on the grounds of his home in Meudon, a suburb in Southwest Paris. A replica of The Thinker stands outside Rodin’s tomb at his home, which later became the Rodin Museum. 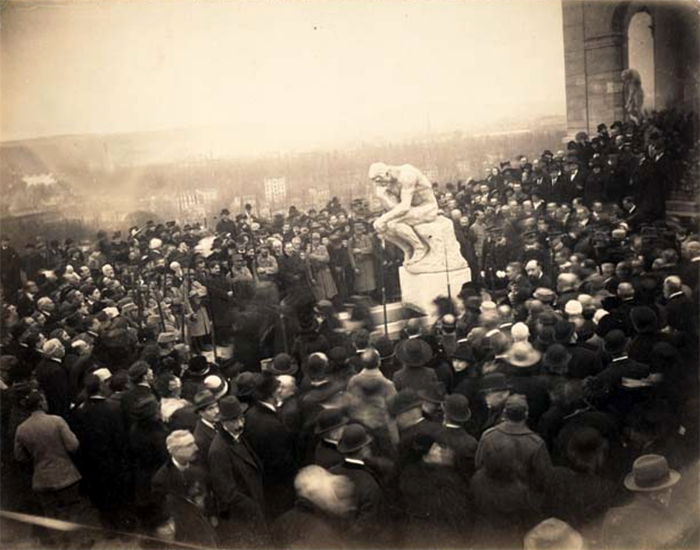 Rodin’s funeral, held November 24, 1917, at his estate. The replica of The Thinker was placed outside his tomb.