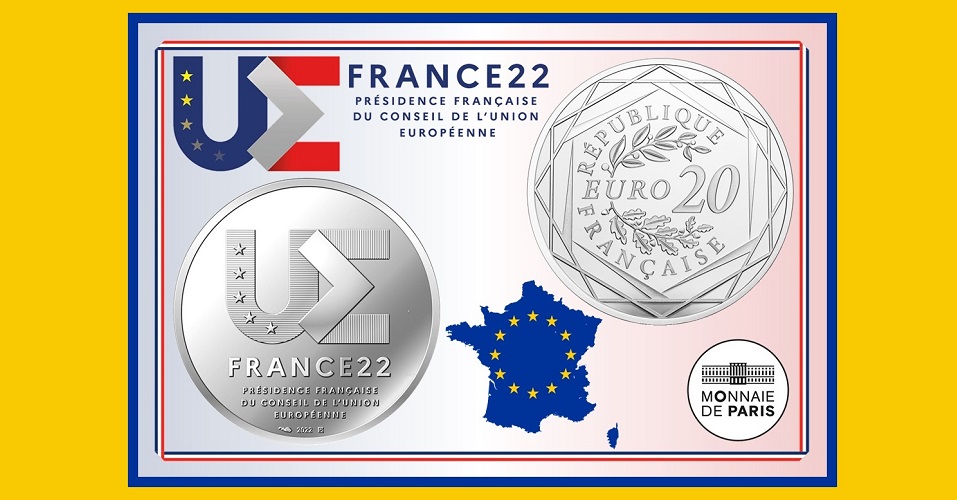 The Monnaie de Paris has released new silver commemorative coins which mark the government of France assuming the rotating EU presidency. Since the evolvement of the European Economic Community into the European Union in 1992, the presidency of the Council rotates among the EU member states every six months. During this six month period, the host country chairs meetings at every level in the EU’s Council, helping to ensure the continuity of the EU’s work in the Council.

The obverse side of the coins depict the emblem of the French presidency of the EU, which includes elements representing a Europe focused on progress, moving forward with pride and strength. Based on the initials of the European Union, the design is highlighted through letters, colours and symbols. The French tricolour flag and the European stars are featured in a stylised fusion. In the shape of an arrow, the “E” of Europe indicates the direction of moving forward. Below the actual logo is the inscription FRANCE 22PRÉSIDENCE FRANÇAISE DU CONSEIL DE L’UNION EUROPÉENNE. The design on the reverse side includes the current standard motif of the geometrical design of shapes arranged in different positions creating a series of borders that encircle the text REPUBLIQUE FRANCAISE and a laurel wreath of sprigs of olive and oak branches. The denomination of EURO 20 is arranged in the centre.

For additional information about this coin and other coins available from the Monnaie de Paris, please visit their website.