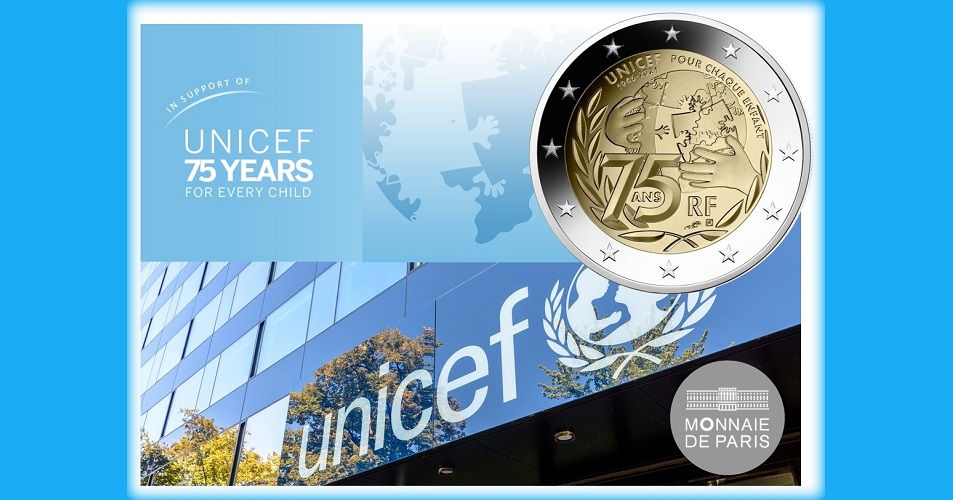 The Monnaie de Paris has released collector’s editions of their commemorative €2 coins in celebration of the 75th anniversary of the founding of the United Nations International Children’s Emergency Fund, commonly known as UNICEF. Since its establishment on the 11th December 1946, this agency, which is an extension of the United Nations itself, has dedicated its activities to providing humanitarian and developmental aid to children worldwide. Their actions were initiated in response to provide immediate relief to children and mothers affected by World War II. The same year, the U.N. General Assembly, through the U.N. Relief Rehabilitation Administration, established UNICEF to further institutionalise and expand the Rehabilitation agency’s work to continue their post-war relief work. Today, UNICEF is among the most widespread and recognisable humanitarian, social welfare organisations globally, with a presence in 192 countries and territories. With an annual budget of USD 5.2 billion (2018), UNICEF, which relies solely on contributions from governments and private donors, of which two-thirds of which come from governments, private groups, and individuals through national committees, is governed by a 36-member executive board that establishes policies, approves programs, and oversees administrative and financial plans.

Designed by Monnaie de Paris senior engraver Joaquin Jimenez, the coin’s obverse side depicts the earth in the shape of a puzzle, a metaphor representing the link that binds us to each other. Two children’s hands surround the globe and remind us of UNICEF’s commitment to children around the world. An olive branch, a symbol of peace, is present on the left side, and which is also a reference to the UNICEF logo itself. The dates of the 75th anniversary of the creation of UNICEF 1946–2021 are present at the top-left, its motto POUR CHAQUE ENFANT (“for every child”), is in the continuity of the date at the top-right. The letters R.F. — in reference to “REPUBLIQUE FRANCAISE” are located at the bottom right, as well as the symbol of Joaquin Jimenez.

The design seen on the reverse side is that of the current motif of all circulation-type €2 coins, which is common to all the countries included in the euro-zone. The face value 2 EURO appears in front of the map of Europe.

Dispatched from the 5th APRIL 2021, the Proof strikes are presented in a branded Monnaie de Paris custom case and is accompanied by a certificate of authenticity. The Brilliant Uncirculated coins are encased in a coin-card blister-pak with informative text about UNICEF. For additional information about these coins and other coins available from the Monnaie de Paris, please visit their website.

On the occasion of UNICEF’s 75th anniversary, the Monnaie de Paris will donate the sum of €2 for any €2 Proof or €2 Brilliant Uncirculated coins purchased by collectors.