The Monnaie de Paris have launched (14th January) a new series of coins, which include elements both traditional and contemporary. This new set of coins marks the start of a seven-year program which will highlight the various currencies which circulated in France from the beginning of the Monnaie de Paris itself to the current era. 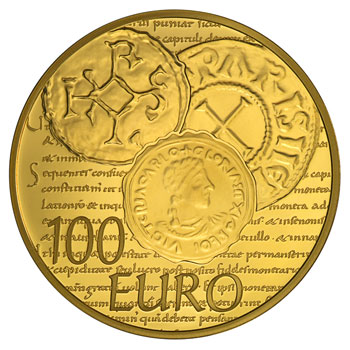 The set issued for 2014 sees the edict of Pitres, signed by Charles the Bald in 864 which established ten official locations for coin minting. A depiction of the first denarius, as struck by the Parisian Mints 1,150 years ago and carrying the word “PARISII” is incorporated in the design of the new four-coin set. The coin’s reverse design also includes the text of the edict on the background of the coins as well as additional images of coins considered important in the development of the French economy over the many centuries. A second historical coin included in the design shows that of Charles the Bald, Grandson of Charlemagne – with the text in Latin “’XPO REGI SIT GLORIA VICTORIA CARLO”  (Let Glory be to Christ and Victory to King Charles) 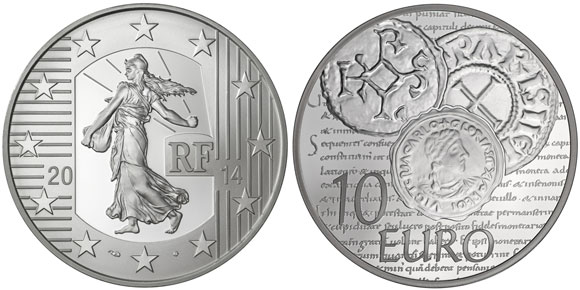 The obverse of the coins depicts the traditional “Sower” as originally designed by Oscar Roty and de-designed by Joachim Jimenez for use on the new French EURO coins which were first struck for France beginning in 1999, the design is presently seen on the current 50, 20 and 10 euro-cent coins.

The coins in the new set are all available separately. For more information on these and other coins offered by the Mint of Paris, please visit their website at: http://www.monnaiedeparis.fr/

Information is offered in both English & French – international orders dispatched.