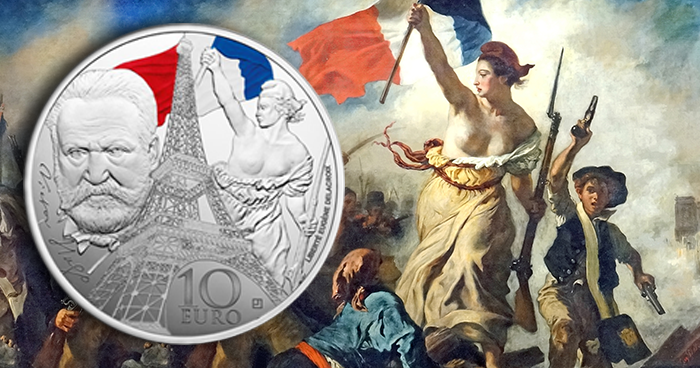 The Monnaie de Paris have launched (24th January) their contributions to the annual Europa Star series of coins. Issued throughout the European Union’s Eurozone member states, the Europa Star series highlights European achievements, anniversaries, and common history or cultural ties. This year’s theme for the Europa series is “The age of Iron and Glass,” which is part of a wider programme focusing on the “Ages of Europe.” The five-year-long, coordinated programme commenced last year and will conclude in 2020.

The 2017-dated French coin set has an exceptional design, featuring one of the world’s best-known structures, located in the capital city of France: the Eiffel Tower. Also included in the featured design are symbols of the French Romantic era in painting, literature, and the development of new technologies and engineering. The design cleverly blends three different elements: the Eiffel Tower, a portrait of Victor Hugo, and an historical painting by Eugène Delacroix entitled Liberty Leading the People. The latter references an historical event that took place during the 19th century and is essentially considered the second French Revolution after 1789. It was prompted to decide the choice of a new king, Louis-Philippe d’Orleans, who took power of the regime during a short period now referred to as the July Monarchy.

The revolution was a revolt that took place over three days—from the 27th, 28th, and 29th of July 1830, later remembered as “Le Trois Glorieuses.” After a long period of parliamentary and ministerial instability, King Charles X, successor to King Louis XVIII and of the house of Bourbon, tried to reinstate his own regime by leading a coup of his own with his ordinances of Saint-Cloud enacted on the 25th July 1830. As a reaction to these ordinances, the budding revolt resulted in a republican revolution. The people of Paris protested and built barricades in the streets to fight against the armed forces loyal to the institution of the Crown, resulting in the deaths of 200 soldiers and 800 insurgents. After what is remembered as the “hesitation of 1830,” the constitutional monarchy was maintained—but only with a formal change to the French dynasty. Louis-Philippe I was proclaimed “King of the French” and no longer styled “King of France.”

The coins are designed by well-known medallic artist Joaquin Jimenez, who has been long associated with the Monnaie de Paris. The obverse design depicts the age of Iron and Glass in France through three main symbols: Victor Hugo, major writer of the 20th century; the Eiffel tower, icon of France’s technological evolution, built for the 1889 Universal Exposition; and the painting Liberty Leading the People, by Eugène Delacroix, evoking the “Trois Glorieuses” of the 1830 revolution. The denomination is placed just below the primary motif and within the arch of the Eiffel Tower. The French flag is vividly colourised on both the 10€ and 50€ silver coins.

The design of the reverse is common to all the countries from the Europa Star programme and features a star in the centre, extracted from the logo. This year’s theme and the name of the issuing country are inscribed in a circular arc. In the center, we can find the national element or representation. In the case of the French Republic, the Europa goddess is dressed with floating flags with year and mintmarks appearing on the bottom left of the coin.

The launch date for the first set of the 2017-dated Europa Star coins will be the 21st February. Each piece is presented in a custom case and accompanied with certificate of authenticity. The five-year programme will consist of:

Nine Eurozone member states will be participating in the 2017 series. For more information on these and other coins offered by the Monnaie de Paris, please visit their website. 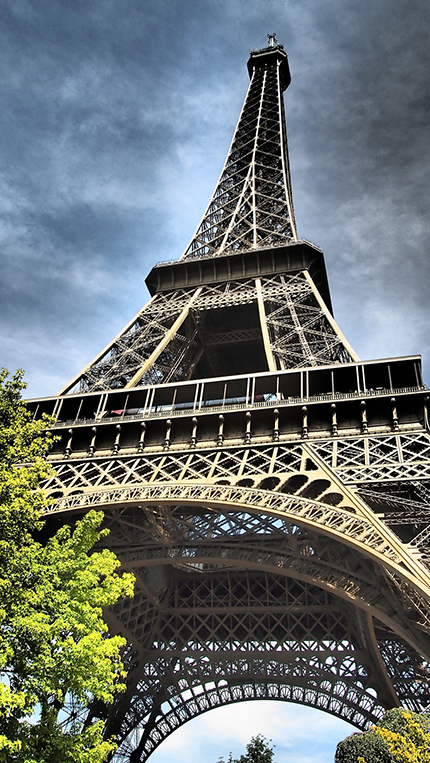 The world famous Parisian monument, the Eiffel Tower, was constructed by Gustave Eiffel and his team for the Universal Exhibition of Paris in 1889. It was erected by 250 workers in exactly two years, two months, and five days between 1887 and 1889. When inaugurated, it was a real showcase of French technical know-how, and marvelled over by the French public and foreign visitors alike. Initially, the fate of the Eiffel Tower was to be that of a temporary structure but, owing to the immense popularity and admiration of its appeal as a tourist attraction and interesting addition to the French skyline, it was saved by the Parisian authorities, who declared it was an asset to the city and should remain permanently. The tower’s height gave it the title of “the highest building or man-made structure in the world” for the ensuing 41 years, until the Chrysler Building’s construction in New York in 1930. During its lifetime, It has been used for many scientific experiments and is still used nowadays as both a radio and TV transmitter. Over time, the Eiffel Tower has become a symbol of the capital city of France and the most-visited paid-attraction site in the world, with more than 7 million visitors annually. The Eiffel Tower has also been a registered Historical Monument in France since 1964 and has been included as a World Heritage site with UNESCO since 1991.

The illustrious Romantic writer and poet was born in 1802 and died in 1885. Victor Hugo is one of France’s major authors as well as a political figure and a committed intellectual. Hugo holds a significant place in the history of French literature from the 19th century and is predominantly known for his poetry works such as “Odes et Ballades,” “Les Contemplations,” “Les Châtiments,” and “La Légende des siècles,” to name but a few. Victor Hugo was also a popular writer who gained great success and worldwide notoriety with such titles as Notre-Dame de Paris, and even admiration as the author of Les Misérables” As a playwright, he demonstrated his talents and theory for the romantic drama with Cromwell and Hernani, Ruy Blas, Lucrèce Borgia, and Le Roi s’amuse. His works also included political speeches to the various assemblies to which he was elected, along with stories of travel and discovery. Hugo was a great contributor to the renewal of poetry and theatre in France and was admired by both his contemporaries and many authors who came after him. His works have enabled many generations to develop a reflection on the commitment to political life and moral choices, and he was was very much an admired and cherished personality during the era of France’s Third Republic. On his death, he was honoured with a national or state funeral with an official escort of his coffin to the Panthéon in Paris on the 1st June 1885, ten days after his passing. 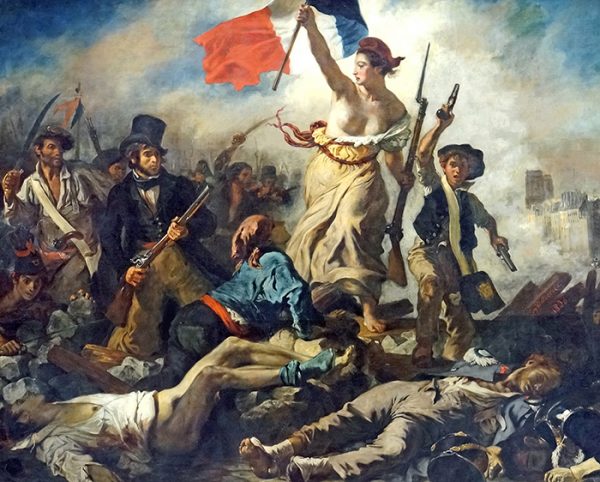 Liberty Leading the People is an oil painting by Eugène Delacroix (1798–1863), completed in 1830 and inspired by the revolution of the “Trois Glorieuses” of 1830 and widely admired by the French nation as one of the greatest recordings of the Revolution. The painting was officially unveiled and presented to the public in 1831 at the painting exhibition of Paris under the original title Scenes of Barricades. The work was then transferred to the Museum of Luxembourg until 1863, then was finally moved to the Louvre in 1874, where resides today. By its allegorical aspect and its political impact, the painting has frequently been chosen as an appropriate symbol for the French Republic. Eugène Delacroix was originally discovered in 1824 and in the following years produced works inspired by history, literature, and contemporary events or travels. In his forties, his growing reputation enabled him to receive major state orders and important commissions. Within French artists of the 19th century, Delacroix is still considered as the primary representative of the Romantic style. He painted on canvas, ornate walls, and ceilings and also produced many lithographs, as well as articles written for papers. Delacroix left a detailed journal to be published after his passing. As tribute to Delacroix and his work, he and the painting Liberty Leading the People were included on the front side of France’s banknote of 100 francs, which was issued between 1978 and 1994.  ❑