The Monnaie de Paris have unveiled their newest program of gold and silver coins, with an unexpected twist—they are designed by famed clothing designer Jean-Paul Gaultier, who is widely renowned as one of the more avant-garde luminaries in the world of fashion. In “La France par Jean-Paul Gaultier,” the designs of the twenty-four €10 coins (released in two collections of 12 each) are inspired by the cities, provinces, and regions of France as seen through his  creative eyes. In addition to each 12-coin €10 collection is a pair of €50 silver coins, one un-colorised, one colorised. A €200 gold coin representing France’s strong symbols completes the series as a whole.

€50, First Design. This coin depicts a hen and a rooster at the 14th of July ball. Gaultier dresses one of France’s major national symbols, the rooster, and his girlfriend, the hen, in eye-catching ensembles of stripes and vivid prints, emblematic of Gaultier’s own clothing ranges. The rooster is wearing a marinière, and the hen, a corset—also iconic items of clothing for the fashion designer. They are dancing under the Eiffel Tower on the occasion of the National Day. (Uncoloured version, first collection)

€50, Second Design (image not yet available). “The Marseillaise,” another emotive symbol of nationhood, is also France’s national anthem. Jean-Paul Gaultier illustrates the anthem with dressed roosters. They could be sports players or just fans from the opposing team but, in any event, they stand and sing together the country’s most patriotic song. (Uncoloured version, second collection)

€50, Third Design. Detailed and illustrated in full colour, the rooster is proudly wearing a marinière, his comb and feathers bear France’s national colours, as seen on the flag—blue, white, and red. In the background, we can see an outline of France and skyline and the sun’s rays. (Colour version, first collection)

€50, Fourth Design (image not yet available). This fashionable hen is also presented in full vivid colour. Her corset and feathers bear France’s national colours of blue, white, and red. In the background, we can see an outline of France as well as the outline of a typical chateau and the sun’s rays. (Colour version, second collection)

€200. The obverse of the €200 gold coin illustrates France and the French Republic’s motto of liberty, equality, and fraternity. France is depicted as a tattoo composed of the typical style of leaves and roses borrowed from Jean Paul Gaultier’s signature collection.

All the coins share a common reverse, which shows the face value of the coin surrounded by two branches (oak and laurel) that evoke the euro symbol. The entire reverse motif is framed in a hexagonal design representing the stylised, geopolitical shape of France.

An exclusive and innovative style of packaging, inspired by the packaging of Gaultier’s perfume containers, was developed in order to store and present the coins. For each €10 collection, a fan-folded brochure with acrylic capsules to hold each of the 12 coins opens for display, then folds shut to fit within the cylindrical container; a leaflet with the specifications and the names of each of the silver coins as well as a quick presentation of the series completes the box presentation. As an alternative presentation, a fabric collector bag—inspired from Jean Paul Gaultier’s own signature collection—can house the €10 silver coin-cards that are sold in the French post offices or the Monnaie de Paris. 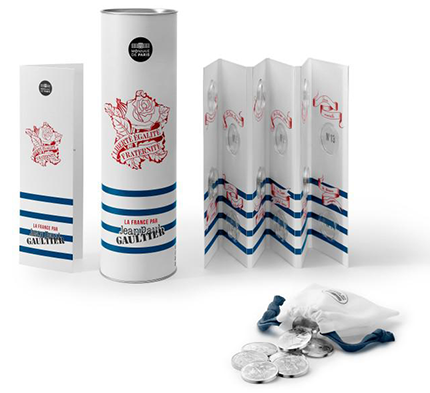 Packaging for the €10 collections.

The €50 uncolourised silver coin and the €200 gold coin are displayed in round cards that can be integrated with the cylindrical container or displayed alone. Each coin’s specifications of the coin are listed on the back.

The un-colourised €50 silver coin card and the €200 gold coin card. 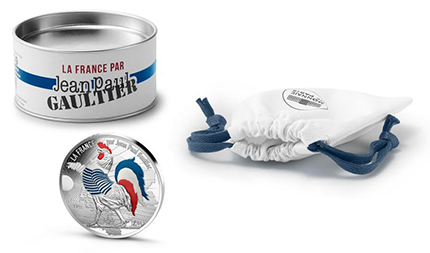 The coordinated packaging for the colourised €50 coins.

Please visit the website of the Monnaie de Paris for more information on this and the other coins the mint offers.

From Striking a Pose to Striking a Coin: The Journey of Jean-Paul Gaultier 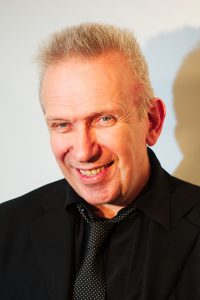 Often described as France’s enfant terrible (or the fashion world’s Terrible Child), Jean-Paul Gaultier has never failed to generate an extraordinary amount of publicity and attention for his innovative, sometimes controversial and inspiring clothing designs. Born in 1952 in Arcueil near Paris, he was fascinated with clothing since his young years and even practised a bit with dressing his teddy bear. He realised that his dream was to create clothing by the time he reached the age of fifteen. In 1970, he sent some of his drawings to the well-known fashion designer Pierre Cardin and started working for him, thus beginning his amazing career in fashion.

He undertook several projects for many brands such as Jacques Esterel and Jean Patou before returning to his position with Pierre Cardin three years later. In 1976, Jean-Paul Gaultier created his eponymous brand, which grew into a world-wide success just few years later. Through his worldwide reputation, he dressed some of the most famous stars, such as Yvette Horner, Beth Ditto, Kylie Minogue, Madonna, and Mylène Farmer. Beyond his products, which have amazed the world of fashion, Jean-Paul Gaultier has impressed the media during his fashion shows and presentations, setting trends with (for example) black kilts for men and cone-shaped corsets for women.

Since 1980, Gaultier has revolutionised fashion by not only overcoming the rules of precise design and tailored haute coutre, but essentially rewriting them, thanks to emblematic French items such as the marinière, the “man skirt,” and the cone-inspired bustier. A man of conviction, he sees himself more as a revolutionary, systematically calling into question clichés, standards, codes, conventions, and traditions. Paris has been a strong source of inspiration and influence for this avant-garde fashion designer. With Gaultier, the French capital merges with the glittering circles of high society and the most eye-catching and—for some—controversial items of clothing. His 1983 collection, entitled “Toy Boy,” marked the beginning of the striped marinière that will forever remain part of his signature collection.

Gaultier once declared, “I like to look at things from an unusual perspective and question what’s expected,” and since the early chapters in his career, he has never seemed to disappoint the dedicated fans of his clothing line. In 2011 his brand and company were acquired by the PUIG group, with Gaultier staying as the artistic designer and consultant of the brand.   ❑
Share: