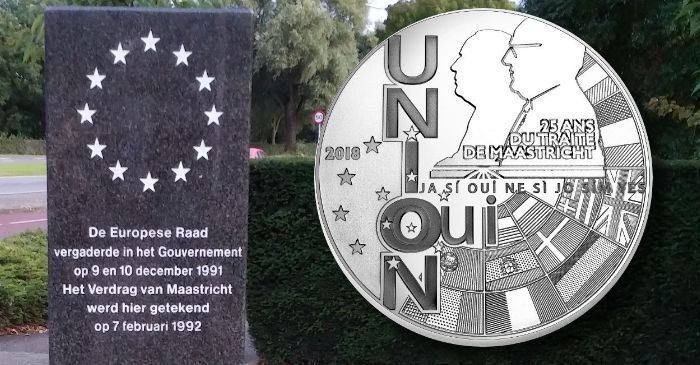 The Monnaie de Paris have issued (5th February) gold and silver coins commemorating the 25th anniversary of the implementation of the Maastricht Treaty, a major event in modern, post-war European history. It was signed‎ on the ‎7th February 1992 in the city of Maastricht in the Netherlands by the foreign ministers of the 12 countries who were members of the European Economic Community — remembered today as the original 12. Referred to as the “EEC” collectively, the treaty aimed for a greater union of European Economic Community members as well as the addition of other European countries as members. The treaty especially detailed closer cooperation with regard to the ability to move goods, finance, citizens, and labour within the borders of the newly named “European Union.” The treaty also adopted an official flag — a blue field with 12 yellow stars in an unbroken circle to represent the European Union. The treaty itself came into full effect on the 1st November 1993. The Maastricht Treaty was also important in terms of developing the European member states economically as it spelled out the development and issue of a single European currency. This was ultimately achieved on the 1st January 2002 when the euro became legal tender in 12 of the then-15 member states. Although the Maastricht Treaty’s main goals and parameters are still in effect, it was succeeded by the Lisbon Treaty which amended both the Treaty of Rome of 1957 and the Maastricht Treaty of 1993. It was signed on the 13th December 2007, coming into effect on the 1st December 2009.

The obverse of the gold and silver coins in the set is comprised of a group of 12 flags representing the original 12 member states. 12 stars accompany the flags, in reference to the European flag. The words UNION and OUI are strong symbols of the agreement and feature prominently in the design. Above the primary design are the outlined profile images of the French President Francois Mitterand and German Chancellor Helmut Kohl — the primary sponsors of the treaty.

The reverse of the coins displays a map of the current European Union, composed of 28 member states. They are represented by stars that shine over the whole world. The reverse also has the letters RF, symbols of the French Republic, and the mint mark of the Monnaie de Paris.

Each coin is encapsulated and presented in a branded Monnaie de Paris custom case and accompanied with a numbered certificate of authenticity. For additional information on these and other coins available from the Monnaie de Paris, please visit their website.