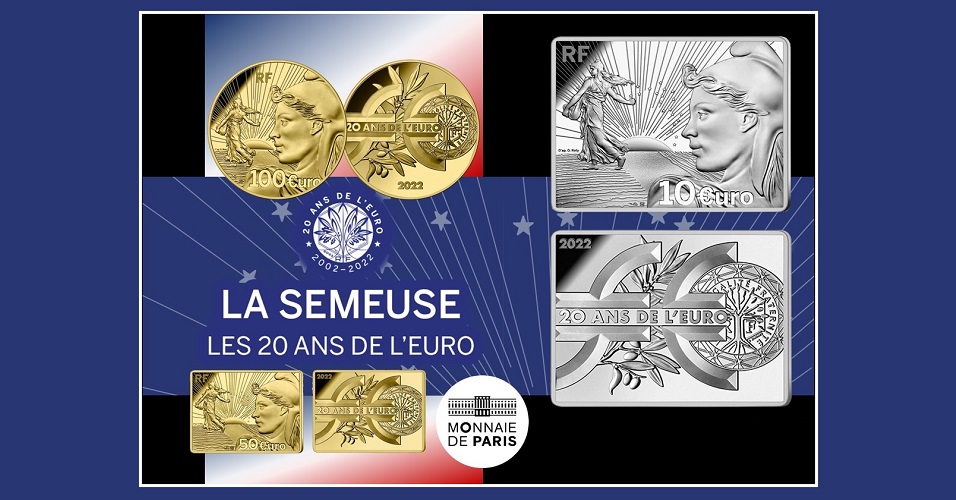 The Monnaie de Paris has released their latest gold and silver Proof-quality collector coins in tribute to the 20th anniversary of the introduction of the euro single currency. As part of the negotiations of the Maastricht Treaty, which transformed the European Economic Community into the European Union (EU), the roadmap to a single currency for use within the then 15 member states was included in the treaty. In 1999, the newly created euro was launched as a virtual currency by the revised European Central Bank, formerly the European Monetary Institute. Finally, on the 1st January 2002, and with much fanfare, the euro currency was issued as a physical instrument of payment, with euro coins and banknotes becoming legal tender in 12 of the then 15 member states comprising the European Union. The transition of currencies was carried out in which more than three hundred million Europeans successfully changed over to the euro in a matter of weeks rather than months. Today, the euro is circulated far and wide, in 19 member states of the EU, European countries outside the EU and independent territories in the Caribbean, South Pacific, and North and South America.

Since 2019, the Monnaie de Paris has paid tribute to the coins that have marked the history of France with the launch of their “La Semeuse” collection. This year the collection continues with coins marking the 20th anniversary of the release of the first euros and one year after the celebration of the coins for the 20th anniversary of the Euro Starter Kit released in December 2001.

The obverse design of the gold and silver round and rectangular coins features the insignia denoting the legacy French franc, accompanied by an olive branch, included in the original franc coins introduced in 1897 and also revived during the monetary reform of the Fifth Republic in 1960. On the right, the symbol of the euro partially encircles The Tree of Life euro coins released in 2002 and designed by Monnaie de Paris artisan Joaquin Jiménez in 1997.

The reverse is identical to that of the “La Semeuse” 2021 collection. On the left is the original sower by engraver Oscar Roty, sowing 20 stars within rays of the morning sun and representing the furrows of the French flag. The allegorical profile to the right is a representation of the original face of the woman Rosalinda Pesce, who inspired the engraver in 1896. The denomination is seen just under the left-facing profile and the letters RF can be seen just above the sower.

Each of the coins is struck to Proof quality, specially encapsulated to accommodate their particular shape, and presented in a custom MdP case accompanied by a certificate of authenticity. All coins in this series are available to purchase as separate items. For additional information about these and other coins available from the Monnaie de Paris, please visit their website.