On November 15, 2012, the United States Mint started accepting orders for the second release of the year for the First Spouse Gold Coin series. The latest coin features Frances Cleveland, the wife of the 22nd President Grover Cleveland. 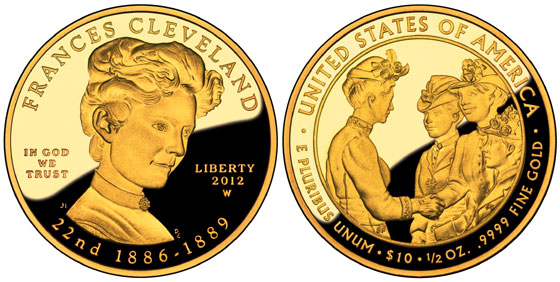 The obverse design of the Frances Cleveland (First Term) Gold Coin features a portrait of the First Lady, designed by Joel Iskowitz and sculpted by Don Everhart. Inscriptions include “Frances Cleveland”, “In God We Trust”, “Liberty”, “22nd”, “1886-1889”, and “2012 W”. The reverse design depicts a scene from a working women’s reception held at the White House. Inscriptions include “United States of America”, “E Pluribus Unum”, “$10”, and “.9999 Fine Gold”.

Both proof and uncirculated versions of the coins are available from the United States Mint. The maximum authorized mintage across both versions has been established at 13,000 pieces. The ratio of proof to uncirculated coins produced will be determined based on customer demand.

The initial prices for the coins are $1,029 for the proof version and $1,016 for the uncirculated version. The US Mint determines prices based on the average weekly market price of gold. Pricing may be subject to change on a weekly basis. Orders may be placed online at http://catalog.usmint.gov/

The next two releases of the program will feature Caroline Harrison and another Frances Cleveland coin to represent her husband’s second term as President. The release date of the Caroline Harrison Gold Coin has been scheduled for December 6, 2012.