The Royal Mint has launched (1st February) a unique four-coin set which includes all circulation portraits of HM Queen Elizabeth II during her long reign which began in 1952. The celebratory set is issued to mark the Queen’s coronation on the 2nd June 1953 which saw the ancient tradition of anointing and crowning of the new Monarch come alive in spectacular pageantry which for some may be a once-in-a-lifetime occurrence to witness.

In the past 60 years there have been four portraits used for circulation coinage in the United Kingdom, each destined to be seen by millions and to achieve iconic status. For the first time ever, all four portraits have been brought together in one set of £5 coins – struck for the coronation anniversary year of 2013 in a sterling silver Proof version, as double-thickness Piedfort examples and as a gold Proof set. To assemble and bring this unique set to collectors, Royal Mint engravers have carefully prepared each portrait with the greatest respect for the original vision of the artist, even giving the designs a higher degree of relief to enhance their beauty. 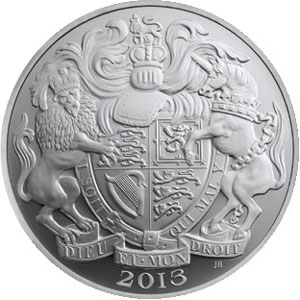 The sets of four coins are united by a common reverse, the heraldic Royal Arms redesigned in a powerful new form. Created by sculptor James Butler, he has reinterpreted the traditional Royal Arms with his modern and imposing design filling the field of the coin. The shield is supported by the Lion for England (on the left) and the Unicorn for Scotland (on the right). The Unicorn is chained because in medieval times it was believed that a free unicorn was considered a very dangerous beast. At the top of the shield is the Royal Crown. 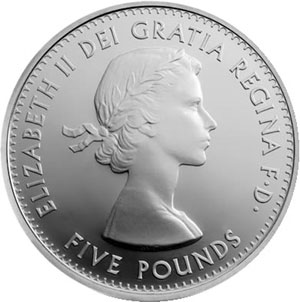 1953: Included is the Queen’s first depiction which was first introduced on British and many commonwealth coins in time for the coronation – a design created by Mary Gillick which depicted the-then 26 year old Queen wearing a laurel wreath with short curls. This portrait only appeared on pre-decimal coins and was retired in 1970 with the last shillings struck for special coin sets. 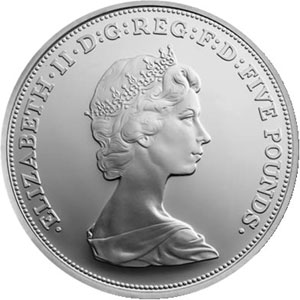 1968: The second portrait introduced when the United Kingdom prepared for a decimal series of coinage, the iconic image of the Queen, created by Arnold Machin was one of the most recognized numismatic portraits ever used and saw this portrait used for the first two years of the new one pound coin as well as the wedding commemorative for Prince Charles and Lady Diana Spencer and a new series of Gold sovereigns, double sovereigns and £5 gold pieces. 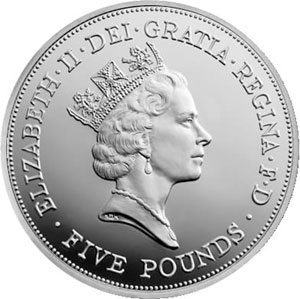 1985: The third portrait introduced was considered by many to be the most elegant design and saw a slightly more mature depiction of the Queen wearing the diadem usually seen on formal state occasions with just a hint of shoulder. This portrait was used for the first year of the new £2 denomination, both the aluminum-bronze and bi-metallic versions and was also seen on the first year of the reduced-sized 50 pence coin in 1997 before it was replaced with the new portrait the year later. 1998: Ian Rank-Broadley’s portrait of the Queen is currently in use and has been since 1998. The depiction of the Queen is more traditional in style and sees the Queen wearing once again, Queen Mary’s Tiara – which was first seen on the Queen’s portrait from the Arnold Machin design. The Rank-Broadley portrait is also used for some commemorative coins, most recently for the many of the Olympic designs in 2012.

For more information on this and other coins / sets offered by the Royal Mint, please visit their website at: http://www.royalmint.com/shop/The_Queens_Portrait_Set_Silver_Proof_4_Coin