On September 13th, 2013, various dignitaries, along with hundreds of Maryland elementary and middle school children, met on the grounds of Fort McHenry in Baltimore, Maryland to launch the Fort McHenry National Monument and Historic Shrine “America the Beautiful” quarter dollar. The launch was timed to coincide with the 199th anniversary of the attempt by the British Navy to invade Baltimore by way of the Chesapeake Bay, and began a weekend-long event commemorating Defender’s Day in Baltimore. During the event, I was seated near several current and former members of the Maryland State Numismatic Association (MSNA), including MSNA President Frank Murphy, as well as U.S. Mint Deputy Director Richard Peterson.

The event was led by Master of Ceremonies James C. Bailey, one of the park rangers stationed at the shrine. Also in attendance was Fort McHenry National Monument and Historic Shrine Superintendent Tina Cappetta, U.S. Senator Ben Cardin of Maryland, U.S. Representatives John Sarbanes and Dutch Ruppersberger (representing Maryland’s 3rd and 2nd Districts, respectively), Baltimore Mayor Stephanie Rawlings-Blake, and Rosie Rios, Treasurer of the United States, who each made speeches about the importance of the fort to the nation during the War of 1812, and of how the events of that battle shaped our national anthem, written by Francis Scott Key while he was detained on board the British ship HMS Tonnant. A delegate from U.S. Representative Elijah Cummings’ office was also in attendance, as the congressman was unable to attend in person. 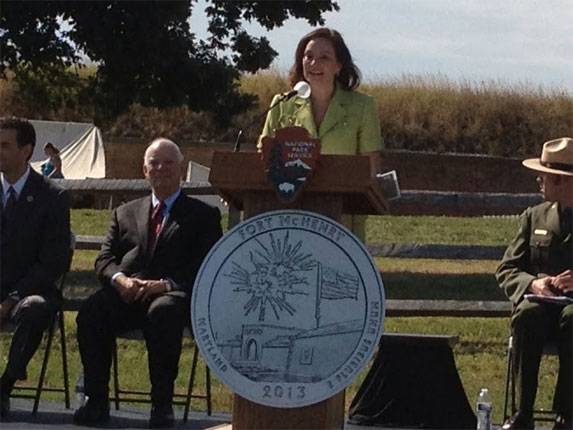 Treasurer Rios said, “The defense of Fort McHenry was the watershed event in the War of 1812, and this new quarter captures the significance of that victory and connects all Americans who use it to Fort McHenry and its honored place in American history.” 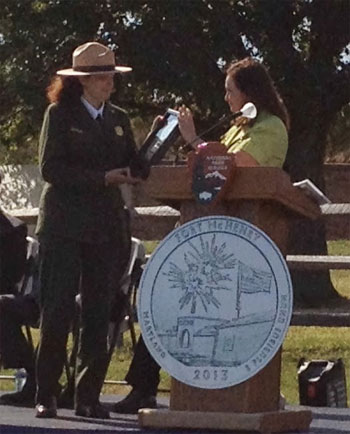 The ceremony concluded with Treasurer Rios presenting a plaque to Superintendent Cappetta containing two Fort McHenry National Monument and Historic Shrine Quarters struck at the Philadelphia and Denver Mints on the first day of production at each location, followed by all the dignitaries pouring two buckets of the new quarters into a large wooden box. After the official ceremony, the school children were each given one uncirculated Fort McHenry quarter, handed out by Senator Cardin, and Representatives Sarbanes and Ruppersberger, among others. In addition, a local bank had set up a tent with tellers who would exchange currency for rolls of the new quarters, up to $100 per person. I obtained one roll, then drove to the nearest U.S. Post Office to have it postmarked to certify that it was from the ceremony. Fortunately, that particular Post Office had been designated as the official location to have the rolls certified. I had the roll stamped and then postmarked by a Post Office official as well. It was a great ceremony; my personal highlights were having a short conversation with Treasurer Rios, followed by receiving an invitation from the Mint for a tour of the production facilities in Philadelphia.