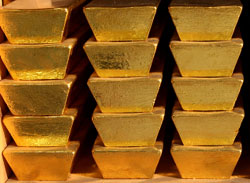 There are some weeks when there are stronger incentives for the US government to work with its trading partners to hold down gold and silver prices.  Precious metals prices took a tumble as soon as the US markets opened on Monday this week.  The trading pattern on the COMEX shows that the prices have been forced down rather experienced a genuine bout of profit-taking.

There are more reasons than usual why the US government would want gold and silver prices to be in the dumps this week:

Next week, the US government will have much less incentive to suppress prices before the jobs report is released at 8:30 AM on July 2.  With the price suppression tactics often used over a 3-day holiday weekend, it may take until July 6 or later before the price of gold again breaks it all-time high record again (again, ignoring inflation).  Stay tuned.