The Treasury of Alderney, Channel Islands have issued (21st June) a five-ounce silver coin which marks the 30th birthday of Prince William, Duke of Cambridge – who is second in line to the British throne.

Prince William Arthur Philip Louis, the eldest son of the Prince of Wales and the late Diana, Princess of Wales (1961 – 1997) was born in London on the 21st June 1982 and as the first born son of the Prince of Wales, was designated as second in line to the throne of the British as well as to sixteen other monarchies within the Commonwealth of Nations. He was married in April 2011 to his long-time girlfriend, Miss Katherine Middleton and upon his marriage, was given the title of Duke (and Duchess to his new wife) of Cambridge by his Grandmother, Queen Elizabeth II. As a trained pilot, The Prince currently serves in the Royal Air Force as part of the Search and Rescue Force and is stationed in Wales. 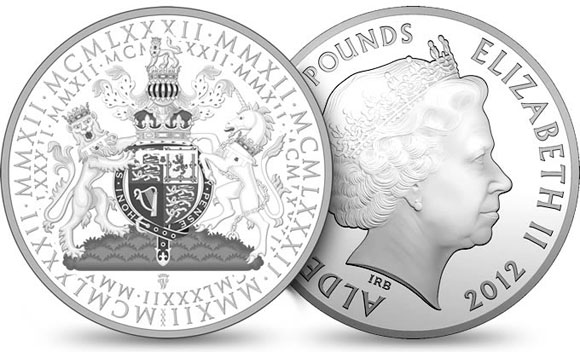 Struck by the Royal Mint in the UK, the reverse design includes the coat of arms of Prince William as both a Prince of the UK, Wales and as Duke of Cambridge. The coin includes the commemorative years Roman numerals “MCMLXXXII” and “MMXII” representing “1982” and “2012” respectively which is repeated around the perimeter of the edge and around the coat of arms in two lines of text. The obverse depicts a profile of the Queen as designed by Ian Rank-Broadley and currently used on all British circulation coinage.

This landmark coin will only be on sale from the 21st June until midnight on Friday 20 July, after which The Royal Mint will announce the final mintage total in line with orders received, thus ensuring that this coin will be a guaranteed sell-out. The coin is still awaiting final Palace approval for design. It has a £10 face value and will be struck in pure .999 fine silver to proof quality with a weight of 156.2 grams (5 troy ounces) and a diameter of 56 mm.

For more information on this and other coins offered by the Royal Mint, please visit their website at: http://www.royalmint.com/shop/p/pw30s5oz