I believe that the First Spouse Gold Coin series, which is now in its fifth year, may be in danger of being prematurely ended unless a radical change is made to the program. The best way to ensure the series’ continued future would be for the U.S. Congress to amend the law that created the coins so that they can be minted from one-quarter ounce of gold, rather than the current one-half ounce.

The First Spouse Coins were created as a companion to the Presidential Dollar coin series that also started in 2007. Both are the brainchild of former Rep. Michael Castle of Delaware, who is also the father of the 50 State Quarters Program. The spouse coins are also issued as bronze medals in a larger format.

The Mint has not yet announced whether target mintage levels will remain the same as last year’s (15,000 except for the Mary Todd Lincoln, which has an authorized level of 20,000).

This series has produced some of the lowest mintage coins ever made by the Mint, as I have previously discussed. Many coins have sold out early such as the Jane Pierce proof coin, the Abigail Filmore BU coin, or the Buchanan’s Liberty proof coin. The Jane Pierce uncirculated coin and the Buchanan’s Liberty uncirculated coins were recently removed from the Mint’s web site.

These coins are an example of what Coin World editor Beth Deisher, an important voice in the coin community, called “a contrived rarity” in her April 7 testimony before the House Financial Services Committee’s Subcommittee on Monetary Policy and Technology on bullion coin programs of the US Mint. The primary example she cited is the 1995-W Proof Silver Eagle, which was only issued in proof as part of a 5-coin set with almost two ounces of gold coins and the silver eagle for $999. So many collectors could not afford the set, and only 30,125 were sold.

As a collector, I am obviously thrilled when a coin sells out early and secondary market prices increase substantially. But it should not be the mission of the Mint to produce expensive coins in low numbers that only dealers, speculators, and the wealthy can afford, thereby creating instant rarities, and making it almost impossible for regular collectors to keep up their collections. The Mint’s mission should be to produce high quality coins for collectors that will stand the test of time and to distribute them broadly to the coin collecting community.

The are two main reasons why the First Spouse Gold Coin program’s future is in doubt unless the coins are minted in a more affordable size. First, with the rapidly rising price of spot gold, the coins are simply becoming too expensive for anyone but the most well heeled collector to afford. When the series started in 2007 with the Martha Washington coin, and gold was approximately $650 an ounce, BU coins were $411 and proof coins were $430. Currently, BU coins are $891 and proofs are $904, following another round of price increases.

Even serious collectors find it very difficult to allocate close to $4,000 a year for one of each new issue to keep their sets complete. Most coin collectors specialize in at least a couple series, and it is never prudent to put all of one’s investment in coins for the year into just four coins, especially given the uneven track record for modern commemorative coins.

It is worth bearing in mind that the 2007 coins, including the Martha Washington and Jefferson’s Liberty coins, which sold out within hours, are today worth only a little more their gold content despite the early sell-outs. Even MS and PF-70 coins cost only a little more. In 2007 the authorized maximum mintage was 40,000 coins per issue including proof and uncirculated versions.

On the other hand, the 2008-2010 coins have performed extremely well on the secondary market because the mintages were unusually low, many coin sold out early, and gold has risen a lot in the past couple years.

The four-coin Liberty subset of the series (consisting of the four coins for presidents who were not married while in office) is also extremely popular because of low mintages and classic coin designs, which appeal to a broad cross-section of collectors. 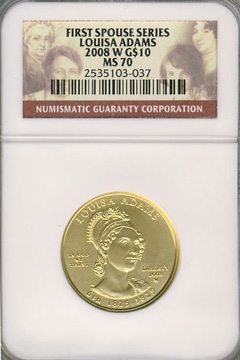 The second reason why the program’s future is in doubt is that, for the most part, the series does not have a sufficiently solid and broad collector base. Many of those who buy them do so to flip them for a quick profit on eBay, either once they have them graded and get a perfect 70, which adds a substantial premium, or as soon as sales end at the Mint. While some collectors have a genuine interest in the coins themselves, for example, because they are the first U.S. coins to depict the wives of U.S. presidents, many people suspect that it is only the low mintages of the 2008-2010 issues that is driving current interest in the series.

There is certainly nothing wrong with collecting coins just because they are low mintage. The U.S. Mint produced a remarkable array of coins in 2007-2008 apart from the spouse coins that are now the keys to their respective series. Examples include the 2007 half ounce burnished gold coin, the lowest mintage half ounce American Gold Eagle ever made, or the 2008 burnished and proof gold and platinum coins, which include several major keys as well.

But I do not believe that a coin series, especially one made of an expensive precious metal, can be sustained over a long period of time if it is only, or primarily, driven by low mintages. To be sustained over time, a coin series needs a wider base of interest and support. Making the coins in a far more affordable one-quarter ounce size is the single best way to accomplish that goal.

Moreover, it is important to try to think ahead, and very few precious metals experts expect gold to decrease in the future in any substantial way, barring a miraculous rebound in the U.S. economy. Even then, inflationary pressures and long-term concerns about the dollar because of the U.S. fiscal and debt situation, are likely to continue to keep gold prices high. Most experts foresee gold prices in the $2,000 range in the next couple years, and long-term predictions range as high as $5-10,000 an ounce or more.

Many collectors of modern U.S. coins believe the Mint has a history of catering to coin dealers and well-off collectors and investors. That may or may not be accurate, depending on one’s point of view, but it is a widely held perception. That is in part because the Mint offers so many high price point items like 4-coin gold proof sets that sell out quickly and do well in the secondary market, and because attempts at imposing ordering limits such as one per household are too easy to manipulate by those looking to acquire more than one coin.

The Mint’s numismatic program, like the first spouse series, may be at risk unless the Mint and the Congress take steps to create a better relationship with the average collector. That is evident from the significant drop in numismatic sales last year. One way to create some of that good will, and ensure the Mint’s numismatic programs have a long-term future, would be to change the First Spouse Gold Coins to a more affordable one-quarter ounce size.