The United States Mint has announced the design selections for the 2011 First Spouse Gold Coins. The series, which enters its fifth year, honors the spouses of the Presidents of the United States on one-half ounce 24 karat gold coins.

The releases for this year will feature Eliza Johnson, Julia Grant, Lucy Hayes, and Lucretia Garfield. The obverse of each coin features a portrait of the First Lady, while the reverse features images or scenes representative or emblematic of her life. 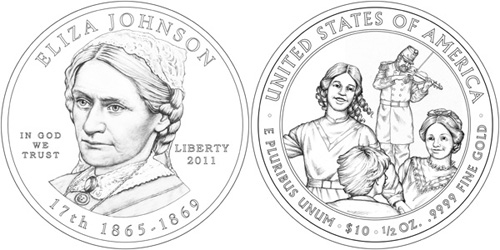 The Eliza Johnson First Spouse Coin includes a portrait by US Mint Artistic Infusion (AIP) Master Designer Joel Iskowitz on the obverse of the coin. The reverse design is representative of the First Lady’s love of children. A scene from children’s ball held for the President’s 60th birthday is shown with three children dancing and a Marine Band fiddler playing. This was designed by US Mint AIP Associate Designer Gary Whitely. This will be the first release of the year for the series, although the exact date is still to be determined. 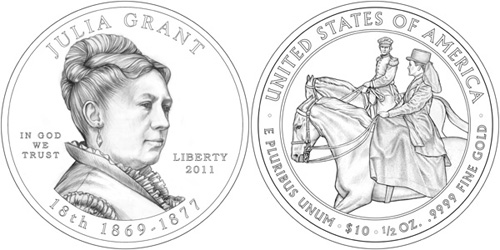 Second to be released for 2011 is the Julia Grant First Spouse Coin. The obverse portrait is designed by AIP Master Designer Donna Weaver and the reverse scene is designed by AIP Master Designer Richard Masters. The reverse portrays a young Julia Dent and Ulysses S. Grant, while a West Point cadet, horseback riding at her family’s plantation. The US Mint has provided a projected release date of June 2, 2011 for this coin. 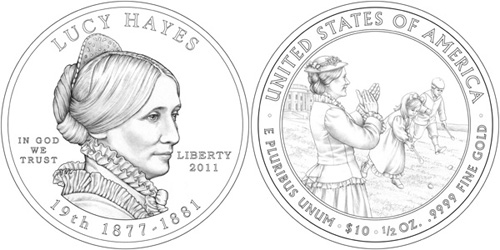 The Lucy Hayes First Spouse Coin is scheduled to be released on September 1, 2011. The obverse portrait of the First Lady is designed by AIP Master Designer Susan Gamble. The reverse of the coin features a scene of the first Easter Egg Roll held at the White House. This was designed by AIP Associate Designer Barbara Fox 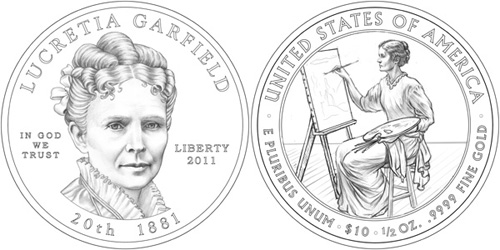 The final release of the year will be the Lucretia Garfield First Spouse Coin. On the obverse is a portrait of the First Lady designed by Barbara Fox. The reverse features a scene of Lucretia Garfield painting with a brush and palette in her hands, as designed by US Mint Sculptor-Engraver Michael Gaudioso. The expected release date for the coin is December 1, 2011.

Pricing for all First Spouse Gold Coins is determined based on the average London Fix price of gold for the weekly period before the release date. Prices are subject to subsequent adjustment based on fluctuations in gold prices. The US Mint typically establishes maximum mintages for each design, and coins remain available for sale until the maximum has been sold or for approximately one year, whichever occurs first.