The First Spouse Bronze medals are authorized under Public Law 109-145, which requires the US Mint to produce and issue circulating dollar coins featuring the former Presidents and 24 karat one-half ounce gold coins featuring their spouses. The same designs used for the First Spouse Gold Coins may also be used for a series of bronze bronze medals. Each year since 2007, the US Mint has offered the 1-5/16 inch bronze medals for sale to collectors individually and as an annual set. 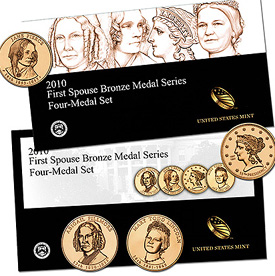 This year’s set includes medals bearing the likeness the Abigail Fillmore, Jane Pierce, James Buchanan’s Liberty, and Mary Todd Lincoln gold coins. The medals are packaged in mylar and placed into a folded card with product information. A custom designed envelope featuring the US Mint’s new branding completes the packaging.

The sets are priced at $15.95. This represents a lower cost than purchasing each of the medals individually. On the release date of each corresponding gold coin, the US Mint had offered individual bronze medals priced at $5.50 each. The individual medals featuring Jane Pierce, James Buchanan’s Liberty, and Mary Todd Lincoln still remain available.

Products may be purchased directly from the United States Mint at http://catalog.usmint.gov.