The Commission of Fine Arts (CFA) recently reviewed design candidates prepared by the United States Mint for the First Special Service Force Congressional Gold Medal. The group offered their recommendations for the obverse and reverse designs to appear on the medal.

The First Special Service Force, also known as the “Devil’s Brigade” was an elite joint American-Canadian commando unit which fought battles during World War II at high altitudes, in rugged terrain, and severe weather. During 251 days of combat, the Force captured thousands of prisoners and liberated numerous communities in France and Italy. Having never failed a mission, the Force won five United States campaign stars and eight Canadian battle honors. The modern American and Canadian special operations forces trace their heritage to this unit.

Under Public Law 113-16, the Congressional Gold Medal will be collectively awarded to the First Special Service Force in recognition of their superior service during World War II. 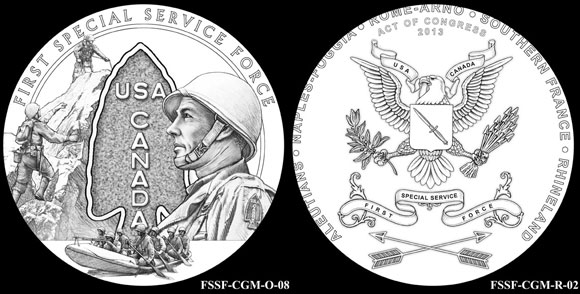 Since there was not a quorum present at the CFA meeting, the recommendations of the attending members will be placed on the administrative agenda for confirmation at the next meeting.

The authority to select the final designs for the medal rests with the Secretary of the Treasury, who will take into account the recommendations of the CFA and CCAC.

Following the award of the Congressional Gold Medal, the authorizing legislation provides that the medal shall be given to the First Special Service Force Association in Helena, Montana, where it will be available for display or temporary loan. The Secretary of the Treasury has the authority to strike duplicate versions of the medal in bronze, which will be made available for sale to the public.