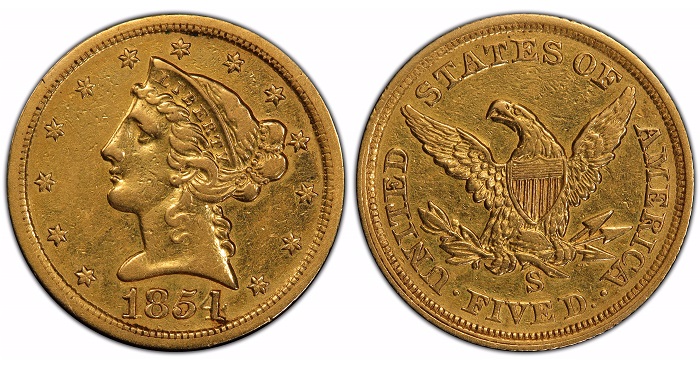 (Rosemont, Illinois) June 24, 2019 — The fourth known 1854 San Francisco Mint Liberty Head half eagle, discovered just last year and subsequently sold at auction for $2.16 million, will be publicly exhibited for the first time during the American Numismatic Association Chicago World’s Fair of Money, August 13-17, 2019. It will be a featured display in the Museum Showcase (booth #1829).

“As with other historic items I’ve happily loaned to the ANA for displays, I want to share this numismatic treasure with the public. It is an important, tangible artifact from the height of the California Gold Rush, and struck during the first year of operations at the San Francisco Mint,” explained the coin’s current owner, ANA Governor Brian Hendelson, president of Classic Coin Company in Bridgewater, New Jersey.

According to Mint records, only 268 half eagles were struck in San Francisco in 1854.

Its discovery was announced in April 2018 by Mark Salzberg, chairman of Numismatic Guaranty Corporation, who described it at the time as “like finding an original Picasso at a garage sale. It’s the discovery of a lifetime; a previously unknown surviving example of one of America’s greatest coins.”

The submitter was an anonymous New England resident who thought the coin had to be a fake because only three 1854-S $5 gold pieces were known at the time. After it was authenticated as genuine, he consigned it to Heritage Auctions, which sold it for $2,160,000 at the ANA 2018 Philadelphia World’s Fair of Money.

The winning bidder was John Albanese, founder of CAC (Certified Acceptance Corporation) in New Jersey, and the next morning he was contacted by Hendelson, who then purchased the coin from him.

“It was a tremendous opportunity to own this great 19th-century gold rarity,” stated Hendelson, who subsequently submitted the coin to Professional Coin Grading Service for crossover service.

A commentary about the 1854-S Half Eagle on the PCGSCoinFacts.com reference website states:

If a poll were taken of knowledgeable numismatists as to which half eagle they would most like to own, the 1854-S would be a strong contender for top honors….

One surviving example is in the Smithsonian Institution’s National Numismatic Collection, and another 1854-S $5 is owned by the Pogue family in Texas. A third 1854-S half eagle was stolen in 1967 in a famous robbery at the Florida home of industrialist Willis DuPont and is still missing. Authenticators stated that the recently discovered fourth example is not the DuPont coin because of diagnostic differences, and Heritage officials said DuPont himself waived any claims to the coin prior to last year’s auction.

“I’m happy to share the 1854-S half eagle at the 2019 ANA convention for everyone to enjoy and to learn about the hobby and Gold Rush history,” said Hendelson.

In addition to the 1854-S $5, the Museum Showcase will contain displays of rare items from the ANA Money Museum in Colorado Springs and other historic money on loan from other collectors and dealers.

The 2019 Chicago World’s Fair of Money will be in Hall F of the Donald E. Stephens Convention Center in the suburb of Rosemont, Illinois, near O’Hare International Airport.