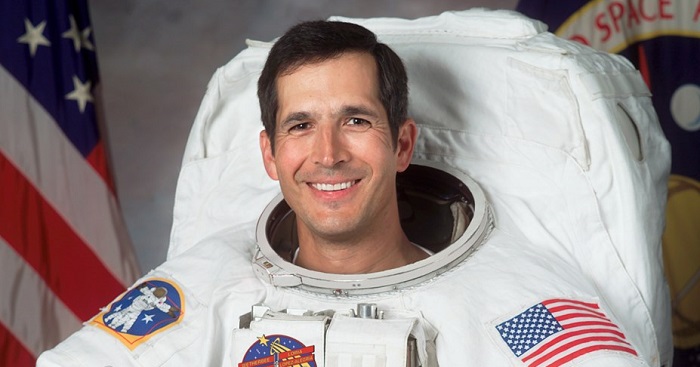 John Herrington was inducted into the International Air & Space Hall of Fame in 2017.

John Herrington was a Mission Specialist on a 13-day Space Shuttle mission, becoming the first enrolled member of a Native American tribe to fly in space.

The only enrolled member of a Native American tribe to fly in space is joining a prestigious group of people who autograph certification labels exclusively for Numismatic Guaranty Corporation (NGC).

John Herrington, who was born in the Chickasaw Nation in Wetumka, Oklahoma, was a Mission Specialist aboard Space Shuttle Endeavour’s mission that launched November 23, 2002, on a flight to the International Space Station. During the 13-day mission, Herrington performed three spacewalks totaling nearly 20 hours. 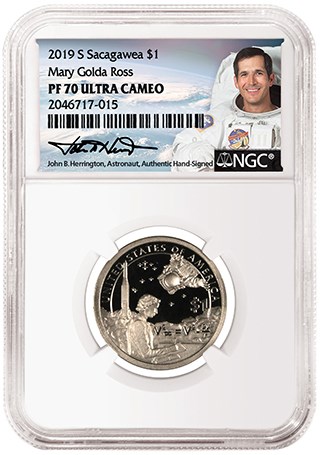 The 2019 Sacagawea dollar’s reverse. John Herrington is the only Native American who has flown in space and done a spacewalk. Mary Golda Ross was a Native American aerospace engineer. Hover to zoom.

Herrington’s spacewalks are commemorated on the reverse of the 2019 Native American Dollar, which features him in a spacesuit along with Mary Golda Ross, a Native American engineer who contributed to the successes of the U.S. space race in the 1960s. The depictions of Herrington and Ross represent the contributions of all Native Americans to the American space program.

The obverse of the 2019 Native American Dollar features Sacajawea, the Shoshone woman who was a guide for the famous Lewis and Clark Expedition in the early 1800s.

NGC’s industry-leading Authentic Hand-Signed Labels program has many connections to the Native American dollar, which has been struck since 2000. Besides Herrington, NGC has an exclusive autograph agreement with Randy’L Teton, the model for Sacajawea. Famous New Mexico sculptor Glenna Goodacre, who designed the coin’s obverse, has also individually hand-signed NGC labels.

Herrington was an aviator, flight instructor, and test pilot in the U.S. Navy before joining NASA in 1996. He grew up in Colorado and Texas and has a bachelor’s degree in applied mathematics and a master’s in aeronautical engineering. He retired from NASA and the Navy in July 2005.

Herrington has thousands of flight hours in more than 30 types of aircraft. But he says none of those experiences compare to the 330 hours that he spent in space as part of the 16th Space Shuttle mission to the International Space Station. To honor his Chickasaw Nation heritage, Herrington carried its flag with him on the mission.

Herrington said that he was humbled to represent Native Americans on a U.S. coin and to participate in the NGC Signature Labels program.

“I hope that signing NGC labels for these special coins will help to make people more aware of Native American contributions to all parts of our national life, including space exploration,”  Herrington said. “It is an honor to have an opportunity to represent my heritage and this country.”

NGC Chairman and Grading Finalizer Mark Salzberg said the company is excited to collaborate with Herrington.

“Herrington is a distinguished military man, astronaut, and Native American,” Salzberg said. “His accomplishments represent the contributions of so many other Native Americans, and we are very happy to have him join our NGC Authentic Hand-Signed Labels program.”

To learn more about NGC Authentic Hand-Signed Labels, visit the website of NGC.