Following up on a recent unveiling ceremony in Hannibal, Missouri, the U.S. Mint has shared its first images of the upcoming 2016 Mark Twain Commemorative Gold and Silver Coins. 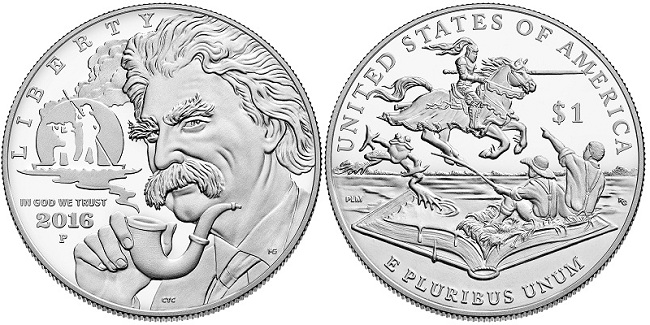 Images of the Proof version of the Twain silver dollar can be seen above; the Uncirculated issue is pictured below.

The obverse of the silver dollar was designed by Chris Costello and sculpted by Michael Gaudioso. It bears a portrait of Mark Twain smoking a pipe; the smoke rises to form a silhouette of Huck Finn and Jim rafting the Mississippi River, as depicted in The Adventures of Huckleberry Finn. Inscribed along the left side of the design are LIBERTY, IN GOD WE TRUST, and 2016. The Philadelphia Mint’s “P” mint mark is also included in the field below the date.

The Proof version of the Twain gold coin can be seen above, and the Uncirculated issue is pictured below.

The gold obverse was designed by Benjamin Sowards, sculpted by Don Everhart, and includes a portrait of Twain with the inscriptions, IN GOD WE TRUST, LIBERTY, and 2016. The West Point Mint’s “W” mink mark is also included in the field below the date. The reverse was designed by Ronald D. Sanders and sculpted by Joseph Menna. A Mississippi River Steamboat is pictured, with the inscriptions UNITED STATES OF AMERICA, E PLUIRBUS UNUM, and the coin’s $5 denomination.