The Royal Dutch Mint has unveiled (6th February) the first official legal tender coin marking the royal Succession. The new coin, a €2 piece, includes the double portraits of the current head of State, Queen Beatrix along with her successor, Willem-Alexander, the Prince of Orange. An announcement was made to the Dutch nation on the 28th January when the Queen announced her intention to abdicate in her son’s favor and the date for this change-over will be on the 30th April, the very same day in which the-then Princess Beatrix herself assumed the title of Queen after the abdication of her mother Queen Juliana, in 1980. 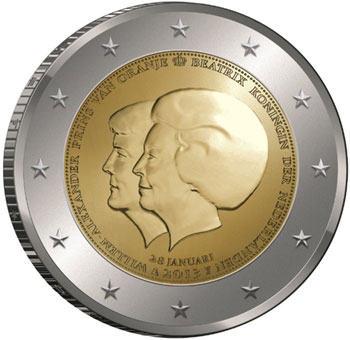 The new coin includes the text “WILLEM-ALEXANDER PRINS VAN ORANJE – BEATRIX KONINGIN DER NEDERLANDEN” the legend is separated with a small crown at the top of the coin, the date of the announcement “28 JANUARI” appears below the two conjoined portraits which are facing to the left. In accordance with Dutch numismatic tradition, all official circulation coinage issued bearing the portrait of the new King Willem-Alexander will face to the opposite direction of the previous monarch, in this case, he will face to the right.

The coin will be made available in Proof, FDC and circulation quality strikes and will be packaged in variations according to their quality. A mintage of 20,000,000 pieces has been authorized and allocated to their respective qualities:

The Royal Dutch Mint will commence with dispatch from the 18th February. For more information on this coin and others offered by the Royal Dutch Mint, please visit their website at:  http://www.knm.nl/2-euro-Dubbelportret/nl/page/697/ Information offered in Dutch only.