The Mint of Finland  have launched two new silver collector coins dedicated to the subject of Literacy. The two coins are part of the Mint of Finland’s Ethical Collector coin series, a program launched in 2009 with their first coin carrying message of peace & security. This year’s coins honors avid readers everywhere – Literacy is a basic human right, achieved through various symbols down the ages, teaching and learning these skills have helped us develop ourselves and our cultures and build equality between the sexes, lasting peace, and democracy.

Literacy itself is defined as the ability to represent the lifelong, intellectual process of gaining meaning from an interpretation of the written or printed text. The key to all literacy is reading development, a progression of skills that begins with the ability to understand spoken words and decode written words, and culminates in the deep understanding of text and language. Literacy is thought to have first emerged with the development of numeracy and computational devices as early as 8,000 BCE. Independent script development is thought to have occurred at four crucial times in human history in Mesopotamia, Egypt, lowland Mesoamerica, and China. The global literacy rate for all people aged 15 and over is 84.1% with many countries in the developed world realizing a 100% literacy rate. About 775 million illiterate adults are concentrated in developing countries on three different continents. 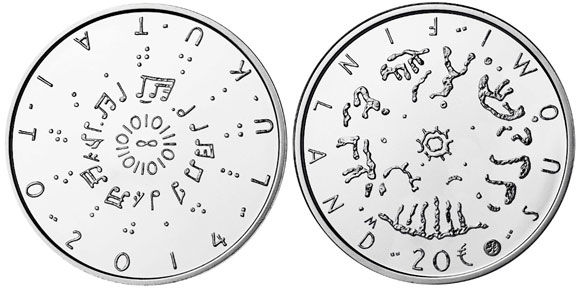 The coins, designed by artist Pertti Mäkinen, feature different symbols which humankind has used to communicate throughout history. The obverse of the coin depicts the symbols, which form concentric circles with the infinity symbol at the center. The infinity symbol is circled by a binary ring which consists of zeroes and ones, which in turn is circled by a ring of musical notes. The note ring is followed by a ring made up of Braille dots, while the outermost ring consists of letters which spell out LUKUTAITO 2014 (‘LITERACY 2014’). The Swedish word for literacy, LÄSFÄRDIGHET, features on the rim of the coin.

The reverse of the coin features cave painting patterns, thought to be the earliest form of written communication, forming a ring. The text SUOMI FINLAND and the denomination – €20 or €10 – are on the outer edge.

The Mint of Finland will issue two different versions of the Literacy coin. The €10 collector coin comes packaged in a presentation gift box, while the collector coin with a nominal value of €20 will be sold in a recyclable cardboard package. The Mint are also offering a limited edition of one hundred individually numbered €20 coins. Order a numbered Literacy coin by calling Mint of Finland customer service direct on weekdays between 9 a.m. and 3 p.m. local time at +358 9 89 434343 from 28 April.

For more information on these and other coins offered by the Mint of Finland, please visit their website at: http://www.suomenrahapaja.fi/eng/lukutaito-20-pahvipakkauksessa/17634/dp?openGroup=323 Information offered in Finnish, Swedish and English – international orders dispatched.