The Mint of Finland have issued (8th November) a new silver coin which pays respect to one of the country’s most respected and admired artists of the late 19th and early 20th century. Eero Järnefelt (1863−1937) was born into a family steeped in culture − his mother was from St Petersburg and his father was a general. Järnefelt studied the arts in both St Petersburg and Paris. Like his contemporaries, he sought inspiration from the beautiful and unspoilt region of Karelia, but only from the province of Savo and Savonians did Järnefelt find the quintessential Finland evoked in his paintings depicting the people. 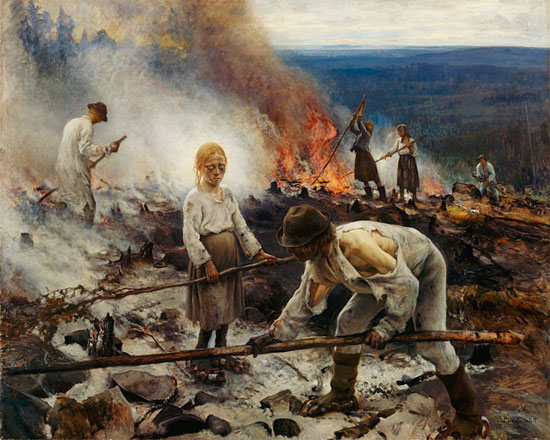 Among the artist’s most famous works, for example, Burning the Brushwood (1893) and A Farmer with his Workers (1893) were painted in Savo. While Järnefelt was, on the one hand, a painter of idyllic and harmonious landscapes, he was also a perceptive portrait artist who, despite his socially advantaged background, understood the day-to-day life of ordinary Finns. There is also a gleam of humor in the artist’s work, which at first glance appears melancholy, as Järnefelt’s depictions of ordinary people portray the tom-foolery of peasants and farmers with a sense of amusement.

Järnefelt achieved practically the status of official portrait artist for the nation in the 1890s. He painted works depicting a number of personages active in cultural life, yet his favorite theme was his own family. The artist continuously drew and painted both his actress wife and their five children in intimate portraits and in ordinary day-to-day pursuits. Alongside his other career, Järnefelt served for many years as a teacher at the University of Helsinki’s drawing school, thus realizing his dream to be a teacher − although in a slightly different capacity to that he envisaged as a young man.

The coin, designed by Petri Neuvonen, depicts the master artist at work, seated with easel and creating a work to be admired for all times. The text “EERO JÄRNEFELT” is placed along the right edge while the year of his birth and death is seen just to the left of the easel.

The reverse includes an element from one of his paintings depicting the land and lakes which Järnefelt is so synonymous with. Along with the representation, the text “SUOMI FINLAND” is placed around the right edge with the coin’s denomination of 10 EURO and the year of issue “2013” just to the left of the primary design.

The coin is available in proof quality only. For more information on this and other coins on offer from the Mint of Finland, please visit their website at: http://www.suomenrahapaja.fi/eng/eero-jarnefelt-proof/17433/dp Information is offered in both Finnish, Swedish & English – international orders fulfilled.