On October 24, the Mint of Finland launched the latest coin in their current collector coin series focusing on the past presidents of the Finnish state. The series celebrates Finland’s centennial anniversary of independence next year. The latest coin in the series highlights the Republic’s fourth president, Kyösti Kallio (1873–1940), who served as president from 1937 until his untimely death in 1940. Kallio is remembered in Finnish history as the leader who was compelled to sign the Moscow Peace Treaty that marked the end of the Winter War, lasting 105 days. The treaty ceded parts of Finland, including the important historic territory of Karelia, to the Soviet Union. Though the treaty preserved Finland’s independence by ending the Soviet attempt to annex the country, it also prompted Finland to join forces with the Third Reich in order to stave off further aggression from Moscow during what was later referred to as the Continuation War from 1941 to 1944.

The coin, designed by Tero Lounas, includes a portrait of President Kallio facing toward the right with the text KYÖSTI KALLIO 1873 – 1940 above the primary design. The reverse features a landscape of Finnish fields, framed by an open book depicting a constructed urban environment. All coins in the series will share the same reverse.

Collector coins in the “Presidents of Finland” series will feature in the “Finland 100” program celebrating the centennial of Finland’s independence. The issue featuring Kyösti Kallio will be the last of the series issued in 2016, with the coins of Risto Ryti, C.G.E. Mannerheim, J.K. Paasikivi, and U.K. Kekkonen due for release in 2017. These will complete the series of Finnish presidents who have passed away within the centennial of independence. (Continued below.)


For more information on this and other coins issued by the Mint of Finland, please visit their website. International orders dispatched where applicable.

Kyösti Kallio, fourth president of Finland, was born in the small town of Ylivieska in the Northern Ostrobothnia region to a family of modest means. Kallio’s father was a farmer who later became a prominent local politician.

Kallio’s own political life began during the years of the Imperial Duchy of Finland, when, in 1904, he was elected to the Finnish diet as a member of the Estate of the Peasantry party. He later joined the newly formed Agrarian Union, or farmers’ party, in 1906, becoming one of its prominent leaders. Kallio became an Agrarian minister in the senates of Oskari Tokoi, Pehr Evind Svinhufvud, and Juho Kusti Paasikivi—the latter two would later become presidents of Finland.

During Finland’s Civil War of Independence, after the fall of the Czar, Kallio resorted to hiding in Red-dominated or Bolshevik-supported Helsinki, since he was at least nominally on the White side (supporters of independence) and therefore, to the Bolsheviks, a “class enemy.” He formed a new senate or government-in-waiting in Helsinki after Imperial German troops defeated the Reds in the city. Afterward Kallio emerged as a moderate peacemaker and expressed his disdain for retaliation against the Reds.

During the debates over the form of the new state in 1918, Kallio resigned from the Senate he had formed because he supported the formation of a constitutional republic instead of the constitutional monarchy that won the vote. The newly formed Kingdom of Finland was very short-lived, owing to the defeat of the Imperial German forces and the abdication of the monarchies within the German Empire—among them, the family of Frederick Charles Louis Constantine, Prince and Landgrave of Hesse (1868–1940), who had accepted the offer to become king of Finland earlier in 1918. As the monarchist cause was lost in December 1918, Kallio returned to the Cabinet and became prime minister under the presidency of Kaarlo Juho Ståhlberg. Kallio is also remembered as a reformist who emphasized education, new rural settlement, and land reform. His greatest achievement was the “Lex Kallio” legislation introduced in 1922 allowing the state to buy land to encourage new settlements and to assist former tenant farmers and other landless rural people to buy small farms for permanent settlement.

Among his other referendums was one in support of prohibition, which after the Great War was a cause supported by many countries and societies as a remedy for the widespread alcohol abuse among the returned soldiers. Kallio was disappointed that this bill was repealed in 1932, but this also seemed to coincide with America’s debate with the same measure of the repeal of Prohibition in 1933.

In a surprising turn of events, the Finnish parliament elected Kallio as president of Finland with the votes of the centrist Agrarian and Progressive parties and a social democratic coalition who wanted to ensure that President Svinhufvud would not be reelected. Kallio reluctantly accepted the position of president, but insisted he govern as a parliamentarian president and avoided use of his personal power whenever possible. He formally assumed the post on March 1, 1937, a time when tensions and military defense were on high alert. All over the map of Europe, border disputes and disagreements were boiling over at a feverish pace, and Finland was no exception. Existing tensions with the Soviet Union resulted in the invasion of Finland by Soviet forces on November 30, 1939, just a few weeks after the Nazi invasion of Poland. The League of Nations deemed the attack illegal and expelled the Soviet Union (which had only become a member in 1934) from the League on December 14, 1939. 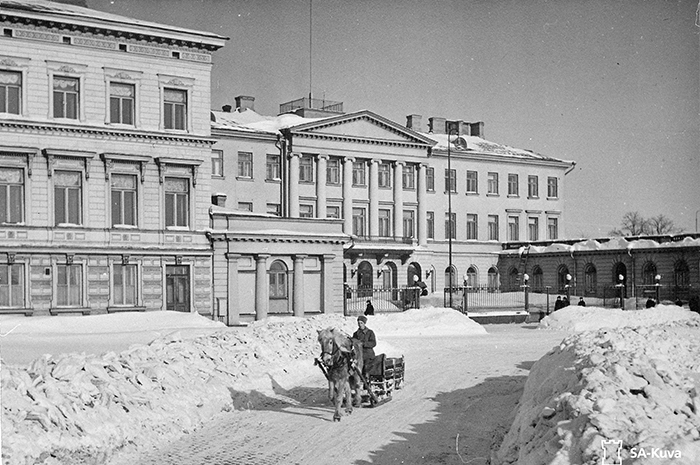 Finland was unprepared militarily and in terms of numbers, but Finnish forces fought with distinction and bravery. The cause was hopeless and Kallio was forced to instruct his prime minister, Risto Ryti, to sign the peace treaty in Moscow on his behalf. The 105-day-old conflict was officially at an end, with much of the province of Karelia ceded to Moscow in exchange for peace. The peace between the two sides would not last long, with the Soviet Union once again invading Finnish territory in June 1941—this time prompting Finland to ally themselves with the Third Reich in an attempt to adequately fight against the Soviet Army.

From the time of the end of fighting with the Soviet Union, Kallio’s health had deteriorated, with his right arm becoming paralyzed. He suffered a serious stroke on August 27 and was not active in the decision or negotiations that saw the formal alliance of the two countries to defeat the USSR. This was completed by the prime minister, who had assumed the responsibilities of the president.

Kallio had officially informed Parliament of his intention to resign the presidency, effective November 27, 1940, with the intention of retiring to his farm in Nivala; Kallio was thus the first Finnish president to resign his office. He reluctantly agreed to attend a farewell ceremony on the eve of December 19 at Helsinki’s Central Railway station before departing for retirement. Fate unexpectedly stepped in on that evening and just as he was taking his official leave, Kallio suffered a massive heart attack and died shortly afterward, the honor-guard band still playing a patriotic song all unaware of the circumstances in the station. Kallio was famously photographed moments before his fatal heart attack; the next day this photo was posted in all of the newspapers announcing the shocking news of the president’s death. Kallio was a devout Christian during his life. It was reported that while in the presidential palace for the last time, shortly before leaving for Helsinki Central Railway Station, he sang a hymn with his family.
Share: