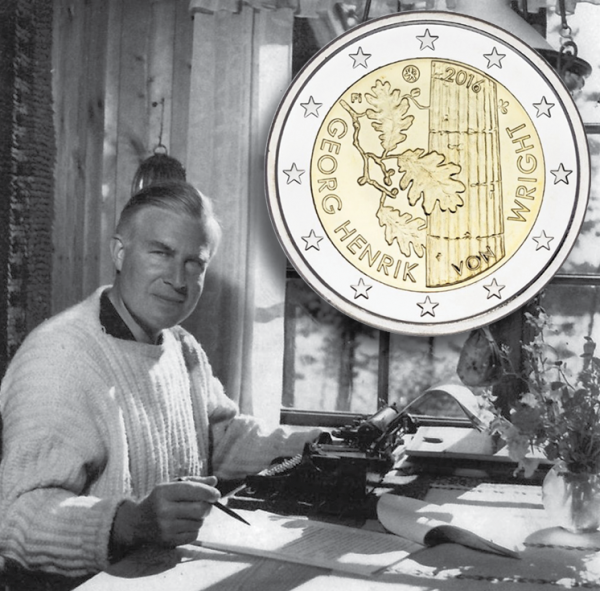 The year 2016 marks the centennial anniversary of birth of Georg Henrik von Wright (1916–2003), who is remembered as a liberal and diverse philosopher and scholar of Finnish society. The Mint of Finland is celebrating the centennial of von Wright’s birth with a new €2 coin, to be released on October 17.

Born in Helsinki during Finland’s era as a Grand Duchy within the Russian Empire, von Wright published his findings and philosophy in English, Finnish, German, and Swedish. In addition to holding a chair at the University of Helsinki, he succeeded philosopher Ludwig Wittgenstein (1889–1951) as professor at the University of Cambridge. Von Wright’s groundbreaking studies in logic, the philosophy of science ,and the philosophy of action put Finnish philosophy in the international spotlight. Considered the most influential Finnish philosopher of the 20th century, von Wright also expressed his opinions on many phenomena of his times and was a familiar figure on television.

The obverse, designed by veteran Mint of Finland artist Nora Tapper, depicts a branch of oak leaves and acorns partly superimposed over an antiquated marble column. The legend GEORG HENRIK VON WRIGHT is placed along the lower half of the coin, with the year of issue seen around the top.

The reverse is that of the standard euro single-currency €2 coin used throughout the eurozone.

The von Wright coins will be available for advance order from the Mint of Finland’s online store as of October 3, 2016, with deliveries commencing on their release date, October 17. Proof strikes are available in presentation cases; Uncirculated coins can be purchased in 25-piece rolls and in Mint of Finland–branded 10-piece bags.

The von Wright commemorative is the second €2 coin issued by the Mint of Finland for 2016. Each country within the single-currency eurozone is entitled to issue a maximum of two coins to mark special events or national anniversaries. Finland’s first coin dated 2016 was dedicated to Finnish poet and journalist Eino Leino.

For more information on this and other coins offered by the Mint of Finland, please visit their website.