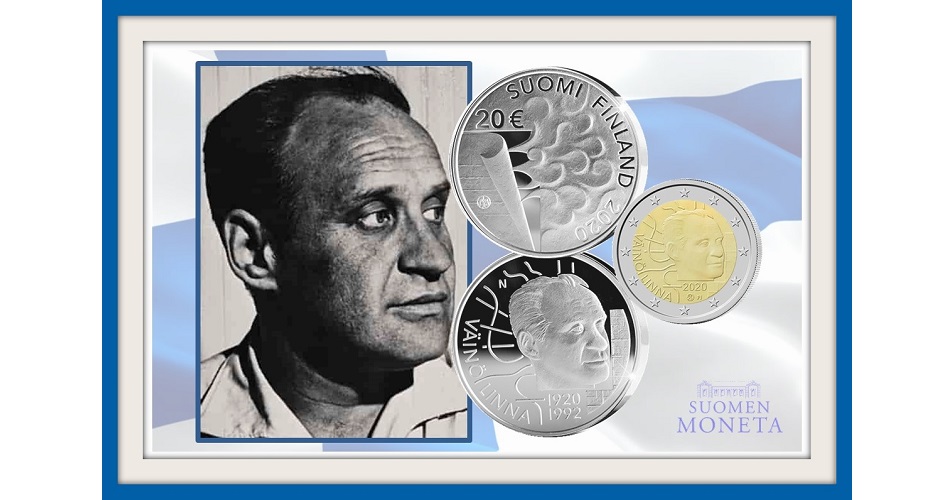 Finland’s Ministry of Finance has released (20th December) new silver Proof quality collector coins on the occasion of the centenary anniversary of the birth of Vaino Linna (1920–1992), one of the country’s most prominent authors remembered for describing the contradictions in Finnish life from the turn of the century to modern times.

Väinö Linna was born on the 20th December 1920 in the municipality of Urjala, 100 miles northwest of Helsinki. Linna was the seventh child of Viktor Linna (1874-1928) and Johanna Maria Linna (1888-1972). Vaino’s father, who supported his family as a butcher, died when Vaino was only seven years old. Thus, his mother supported her entire family by working at a nearby manor as a domestic. Vaino would rise from his humble circumstances to become a successful writer and a social influencer. Linna’s most famous works, The Unknown Soldier (1954) and the Here Under the North Star trilogy (1959‒1962), uniquely depicted Finnish society for more than 70 years. Linna died on the 21st April 1992 at the age of 71 and was survived by his wife and two children. In tribute to Linna, he was pictured on Finland’s 20-markka banknote, which was in use from 1993 until the introduction of the euro in 2002.

The Mint of Finland produces the coins at their facilities in Vantaa, on behalf of the Finnish Ministry of Finance. Designed by Architect Petri Neuvonen, the obverse side includes a portrait profile of Vaino Linna facing right modelled from a casual photograph taken of him. In the background is a depiction of curved lines representing cotton threads at the Finlayson’s spinning mill where Linna worked as a young adult; they also represent braided plot twists which Linna worked into his novels. Along the lower-left edge is the text VÄINÖ LINNA and the years 1920 and 1992, which is placed just below Linna’s profile. The reverse side features a stylised page turning in a gust of rifle fire, in recognition of the novel The Unknown Soldier, a Second World War epic. Along the upper-right edge is the text SUOMI FINLAND, along with the year of issue 2020. The face value 20€ is placed to the upper-left.

Each silver Proof coin is encapsulated and presented in a custom case accompanied by a certificate of authenticity. The same obverse design was also utilised for one of two of Finland’s annual commemorative €2 coins. For additional information about these coins and other coins issued by the Finnish Ministry of Finance, please visit the website of Suomen Moneta.

Collectors ordering from outside Finland may do so by visiting here.

Finland: Gold coin issued in celebration of centenary anniversary of the University of Turku