The Mint of Finland has issued two new collector’s coins to mark the 150th anniversary of birth of one of the country’s most celebrated artists & sculptors.

Emil Wikström (1864–1942) was one of the most popular Finnish sculptors of his time. In keeping with the spirit of the times, he was inspired by his home country’s cultural heritage and by folklore in particular. All major public or national sculptures during his lifetime were commissioned from Wikström, such as the pediment of the House of the Estates and the monument to Elias Lönnrot. The granite bear in front of the National Museum and the lantern-bearers that adorn the Helsinki Railway Station were also sculpted by the hand of Wikström. The photograph on the cover of the collector coin’s package was shot in Wikström’s atelier, with the artist surrounded by his unforgettable work.

Born in the district of Turku, Wikström studied art in Finnish Art Association’s drawing school in Turku and Helsinki, at the Academy of Fine Arts in Vienna and also at the Académie Julian in Paris. Wikström as well as other artists took inspiration for their art from their own country’s cultural mythology. Though some Finnish artists studied and worked in Paris, some decided to retreat to the peace of the forest as Wikström reported in a letter to Axel Gallén-Kallela (1865 – 7 March 1931) a Swedish-speaking Finnish painter best known for his illustrations of the Kalevala, dated 1898. Wikström was determined carry out this plan and he found the ideal place for himself in Sääksmäki, a village and a former municipality by Lake Vanaja in western Finland. One of his more notable public works projects, The Helsinki Central Rail station building was designed by Eliel Saarinen and inaugurated in 1919. It was chosen as one of the world’s most beautiful railway stations by a BBC poll in 2013. The station is mostly clad in Finnish granite, and its distinguishing features are its clock tower and the two pairs of statues holding the spherical lamps, lit at night-time, on either side of the main entrance, Wikström’s impressive contribution. 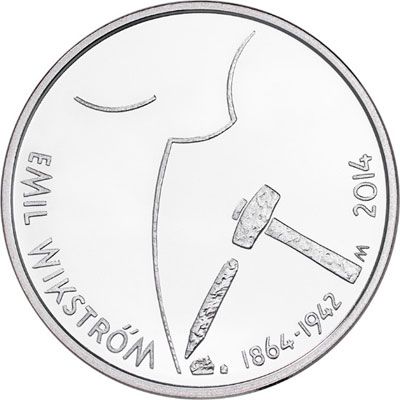 The coins, designed by Pertti Mäkinen share the same design on both denominations and include the image of a traditional hammer and chisel along with a stylized linear figure being shaped. The text “EMIL WIKSTRÖM 1864–1942 is placed around the lower edge along with the year of issue and initial of the artist. 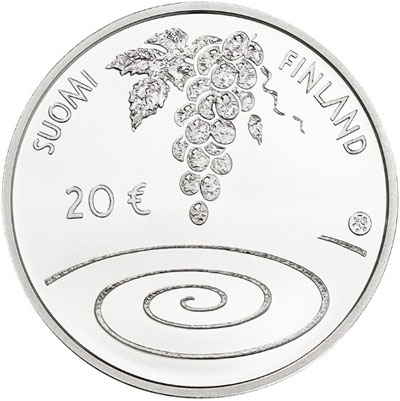 The reverse depicts symbols of the tranquility of the forest and countryside in which Wikström worked and lived. A cluster of grapes can be seen towards the top half of the coin and the circular water waves of a lake is shown just underneath. The text “SUOMI FINLAND” and the coin’s denomination are also seen on the reverse along with the Mint’s insignia.

Both coins are delivered in a beautiful custom presentation package complete with a photograph of Wikström in his studio surrounded by the artist’s memorable sculptures.

For more information on this and other coins on offer by the Mint of Finland, please visit their website at: http://www.suomenrahapaja.fi/eng/emil-wikstrom-20-proof/17792/dp?openGroup=341 pre-orders are being accepted for dispatch after the official issue date. Information offered in English, Finnish and Swedish, international orders dispatched.