The Mint of Finland has announced the issue of two new coins featuring one of the country’s most well-known and loved confectioners, Karl Fazer (1866 – 1932), on the 150th anniversary of his birth.

Finns and visitors to this Nordic land will know the name of Fazer and the many products that this brand produces, from luxury chocolates to hard candies. The brand – with its ever-present blue wrapper, a symbol of Finland itself — has become a favorite with not only Finns but for many Europeans and is for many synonymous with quality and fine ingredients.

Karl Fazer was born in Helsinki in 1866. He was the son of Eduard Fazer, who originally hailed from Switzerland, the chocolate capital of the world. Although the Fazers were Swiss by heritage, and some of the best chocolate was produced in Switzerland, Eduard Fazer was not at all impressed by his young son’s choice of a career. Karl possessed little training at this time and knew he needed to find an appropriate apprenticeship to develop his expertise.

The young Fazer was accepted as an apprentice at the G. Berrin patisserie, a well-known and reputed confectioner in St. Petersburg, Russia. With further training in Berlin and Paris, the 25-year-old Karl Faser was confident enough to return to his home in Helsinki and try his hand at the profession.

In the autumn of 1891, Karl Fazer opened his first café situated in a property owned by his father at number 3 Kluuvikatu, in the center of a growing Helsinki. He also opened another café in smaller premises in the building next door and joined the two apartments above, with Fazer living on the upper floor. This café, which is one of Helsinki’s more well-known landmarks, is still in business today and is part of the Fazer family’s holdings. 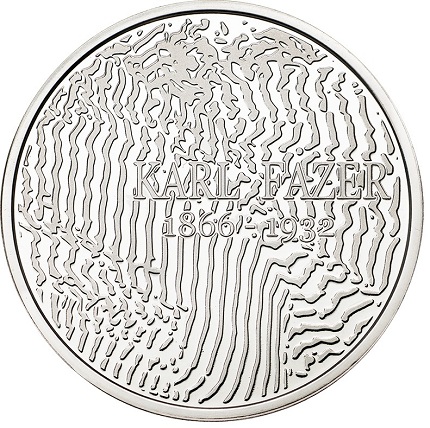 Over time, Karl Fazer and his products developed a reputation for excellence and quality. He succeeded in successfully transforming his knowledge of the finest Russian and French confectionery art into appealing treats with eye-catching packing and presentation. The Fazer company is also remembered for having placed some of the first advertisements on the sides of Helsinki streetcars toward the end of the 19th century.

Karl Fazer married Berta Blomqvist, a business school graduate who was regarded as Karl’s closest business advisor, as well as being the mother of the couple’s four children. Karl Fazer passed away in the autumn of 1932 at 66 years old. He was succeeded in the family business by his eldest son Sven, who had joined the company at the age of 17 and is credited with expanding the operation substantially as its Managing Director from 1939 onward.

The coins come in €10 and €20 denominations and share a design created by Kirsti Doukas. Since Karl Fazer was also remembered as a nature-lover and bird enthusiast, the plumage pattern of the grey partridge is featured on the obverse side, paying tribute to this aspect of his character. The text KARL FAZER 1866 – 1932 is also included in two lines situated in the center-right half of the coin. The reverse side depicts elements of the fruit of the cocoa tree, the essential ingredient of chocolate. The denomination of €10 or €20 is placed to the lower right of the cocoa tree, along with the year of production.

The coins are available to advance-order from the January 11 and will go on sale on January 28, 2016. For more information on these and other coins offered by the Mint of Finland, please visit their Web site. International orders will be dispatched where applicable.