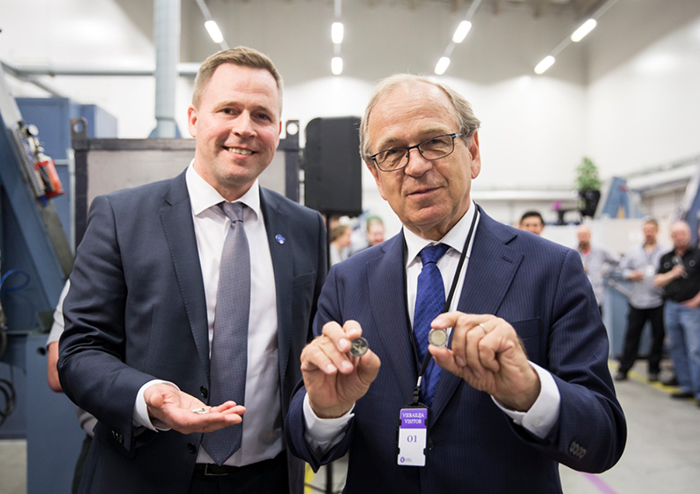 The Mint of Finland’s CEO, Jonne Hankimaa (left), and governor, Erkki Liikanen, attend the first-strike ceremony on May 16. (Event photos by Michael Alexander) 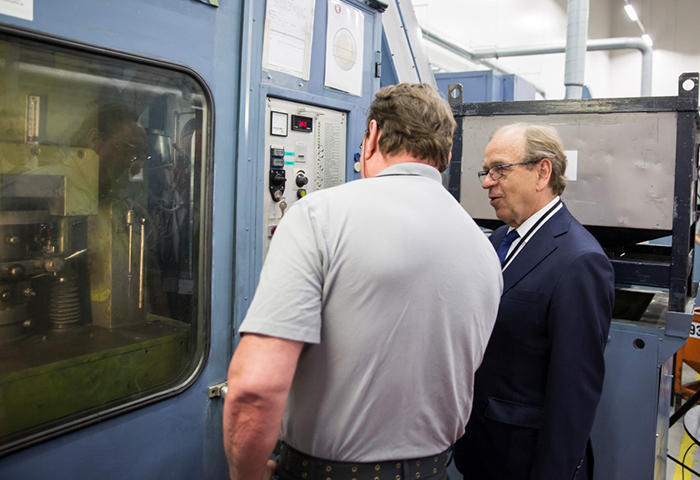 The specially designed coin celebrates the centenary anniversary of Finnish independence, which was declared in November 1917. The national side of the €2 coin is the work of designer Simon Örnberg, who also designed the gold coin being issued on the occasion of Finland’s 100th anniversary of independence. The commemorative design features a mosaic forming a cartographic image of Finland. According to Örnberg, this represents Finland as an increasingly open society that is integrated and networked with the surrounding world. The reverse of the new commemorative coins are identical to the reverse of normal circulation pieces within the eurozone. The designs and release of special €2 coins is up to the individual eurozone countries, which are allowed up to two different commemorative designs annually. The European Central Bank approves their mintages and final designs. All euro coins issued within the eurozone are legal tender throughout the 19 countries where the euro is in use.

The new €2 commemorative coins are scheduled for official release from the 1st June, with 2.5 million being minted for the occasion. They are also available from Mint of Finland’s online shop and retailers in Uncirculated or Proof quality. Please visit the e-webshop  of the Mint of Finland for more information on these and other coins on offer.   ❑

Denmark: Production of national coinage begins at Mint of Finland