From May 16th and May 17th Heritage Auctions will sell the US Colonials offered as part of the Newman collection. Included are many colonial rarities, including pieces that have been off the market for many years. Perhaps the most exciting and historical of all lots offered is lot 30423, one of only four 1776 Continental Dollars known to exist in silver. Struck in 1776 by a very young United States of America, Continental Dollars are generally regarded as the earliest coins struck after the United States declared itself independent from Britain, although the exact time of striking is unknown. The coin, graded by NGC as MS-63, sold for $1.41 million yesterday evening, setting a new record for any Continental Dollar. 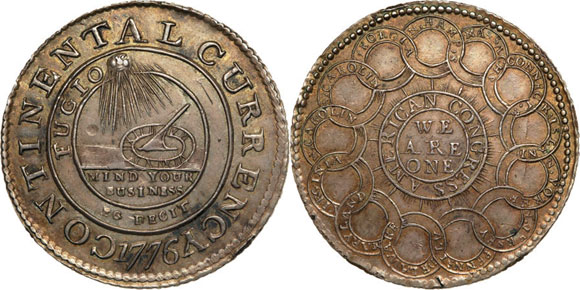 The Continental Congress never officially authorized coins with the inscription “CONTINENTAL CURRENCY”. Instead, it is speculated that their legislation was considered to have been included in some of the later acts of 1776 authorizing the issuance of paper money to fund the war effort. One-dollar currency was included in the early denominations authorized and issued in 1776, although the later acts lacked specific legislation for paper money of one-dollar value. It is therefore speculated that the Continental Dollar was meant to replace the paper money of the same value. Examples struck in pewter come to the market with some regularity, and a few Continental Dollars are known to have been struck in brass. Silver was in extremely short supply during the early revolutionary war years, so it must have been decided to strike the coins in a metal of lesser value.

The first major reference work on American colonial coins, Sylvester S. Crosby’s 1875 work The Early Coins of America spent less than two pages describing the Continental Dollars, listing it under the “patterns and tokens” section. Eric P. Newman, whose collection is being sold, wrote the definitive reference work on the series, in 1952. He listed a total of seven die combinations, of which only two varieties are represented by silver examples, varieties 3-D and 1-C, with two of each known in silver. Three of the four coins show significant evidence of circulation, indicating perhaps that Continental Congress intended to replace pewter coins with silver coins whenever the silver became available. Only one uncirculated piece is known to exist, and this is the coin that Heritage sold. 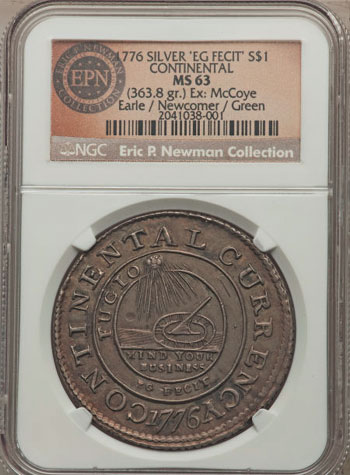 The pedigree of the coin auctioned by Heritage is relatively well documented. It first appeared in a British auction sale in 1886, held by Sotheby’s. The coin made its way back to the United States, where it first was offered in a Chapman auction sale six months after the sale in Britain, in mid 1887. The lot, however, was withdrawn, and not offered for sale until 1912, again by Chapman, when it sold for $2,200. After a number of private transactions, including sales by Waldo Newcomer and the “Col.” E.H.R. Green estate, the coin was purchased by Eric P. Newman in 1952 for $2,500 and has remained in his collection ever since.

All three other known silver examples were part of the John J. Ford sales held in the early 2000s, and have not been auctioned publicly since then. Given the fact that these historic coins are offered for sale very infrequently this was an extremely important offering. It can easily be decades before any of these coins are offered again for sale, and it is likely that when it does such a coin will be part of a major collection and gather major attention.