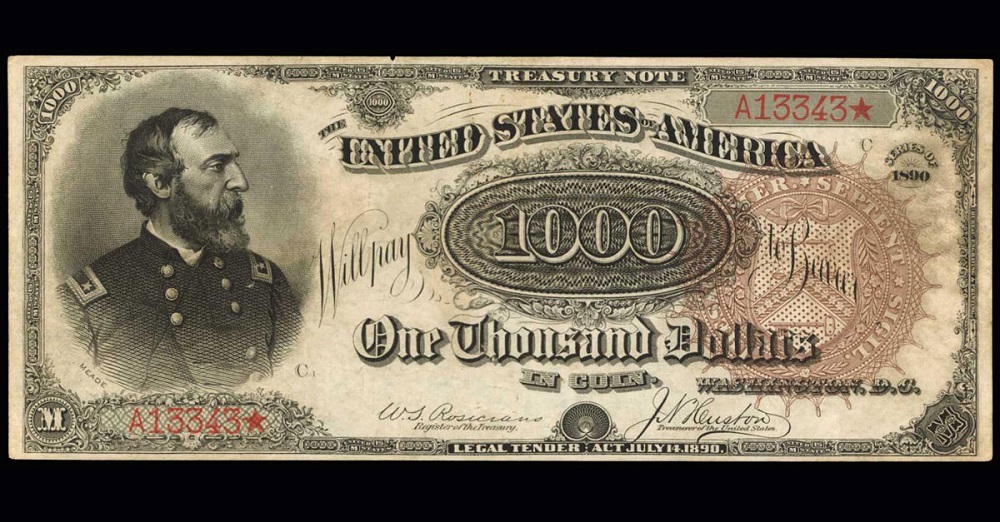 Available again to collectors is the “Holy Grail” of American currency: The “Grand Watermelon” 1890 $1,000 Treasury Note. Graded by PCGS Currency About New 50.

No single note has captivated United States currency collectors as much as the 1890 $1,000 Treasury Note. They are famously known as Grand Watermelon notes, a nickname that refers to the distinctive large green zeros on the back of the note that resemble the fruit. The type is known in two varieties: Fr.379a (W-4580) with a large brown Treasury Seal and signatures of Rosecrans and Huston, and Fr.379b (W-4581), with a small red scalloped Treasury Seal and signatures of Rosecrans and Nebeker. The face portrays Union Major General George Meade at left. Meade is best known as the victorious commander of Union forces at the Battle of Gettysburg. Near the center is an ornate 1000 die counter with floral ornaments.

The Grand Watermelon notes were voted No. 1 in 100 Greatest American Currency Notes by Q. David Bowers and David M. Sundman. The present note is the plate example for the type and is also featured on the cover of the book. Here are excerpts from what Bowers and Sundman said about this issue:

Rolling into first place in the 100 Greatest survey is the $1,000 “Grand Watermelon note,” more formally known as the 1890 Coin Note or Treasury Note. For a long time this has been the Holy Grail for collectors of federal currency. Before the survey results were compared, those behind the scenes working on the book speculated that the Grand Watermelon note would make first place, and we were right! Quite a few guesses as to other positions were off the mark. 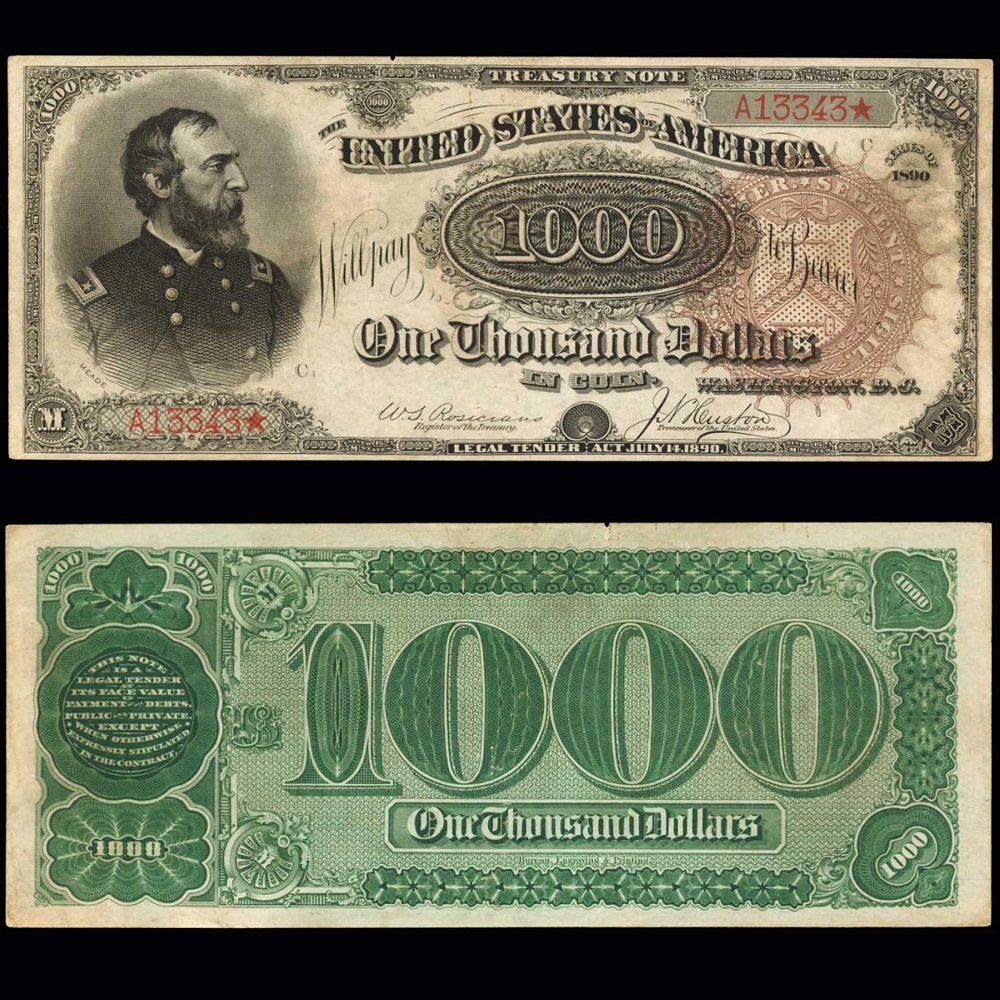 The nickname of this note is derived from the large, green zeroes on the back, which look like delicious watermelons. Today, Grand Watermelon note is a term of affection, but it was not viewed this way by the Treasury Department in 1890, and steps were taken to change the design. Similarly, these wonderfully ornate notes were not admired by the public in their time. An article published in the Boston Evening Transcript in 1891 noted that a new series of designs was on its way, and that:

There will be no mourning for the old backs. At the Treasury they have never been regarded with very tumultuous approval. Officials at that institution commonly refer to the denominations representing $1,000, $500 and $100 as “water melons,” because of the striking resemblance which the huge 0’s bear to the juicy vegetable in question.

They believe that the genius of Chief Engraver Casilear can produce very superior substitutes. Certainly a note that is not engraved all over is handsomer, and the best experts are of the opinion that a few scattered designs, very elaborate and executed in the highest style of art, are most difficult to counterfeit successfully.

This note is the finest of the seven known Grand Watermelon notes, four of which are permanently held in government collections. It represents the first variety of the type – Fr. 379a – with the engraved signatures of Treasury officials Rosecrans and Huston along with the distinctive large brown Treasury Seal at right. Previous owners include F.C.C. Boyd, James Wade, Amon Carter Jr., and Joel R. Anderson among others. No elite level United States paper money collection is complete without this celebrated type. At any given time, only three collectors in the world can own an example of this legendary rarity.