The Mint of Finland has issued (21st October) the remaining two coins in the very popular historical provincial buildings series, a coin set which immortalizes buildings or structures from each of Finland’s historical provinces. Traditionally, commemorative coins have depicted significant persons or events. However, this new coin series reminds us of the significance of buildings and structures for our identity and culture.

Authorized by the Ministry of Finance in Finland, the set comprises the nine historical provinces: Åland, Tavastia, Karelia, Lapland, Ostrobothnia, Satakunta, Savonia and Uusimaa and Finland Proper. Many of these landmarks have witnessed major historical events and, perhaps most importantly of all, each of them carries a unique message about Finland’s past and the lives of our forefathers. The nine coin set, originally begun last year is now complete with the issue of the coins representing the provinces of Tavastia and Ostrobothnia. The coins, minted as 5 €URO pieces depict relevant buildings or structures closely connected with the region or province itself. 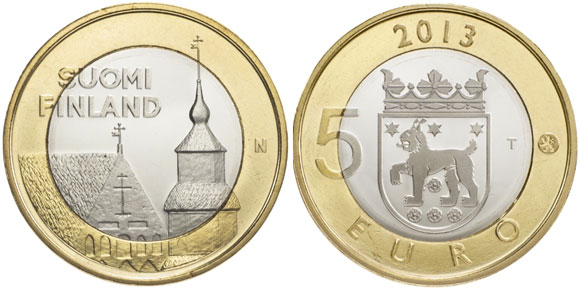 Tavastia: The coin depicts a place where the people of Häme have congregated for more than a millennium.The medieval stone Church of St. Lawrence in Janakkala was consecrated in 1520, but the people of Häme had been using the location for worship and gatherings for centuries before that. A clear sacrificial spring from pagan days still bubbles by the church hill. 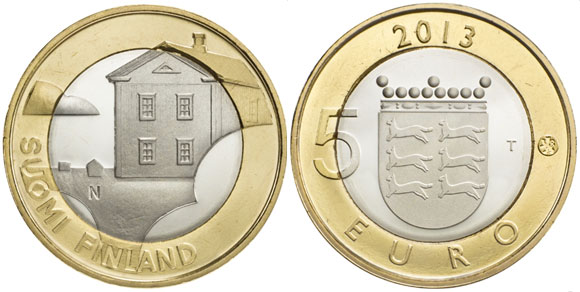 Ostrobothnia: Ostrobothnians are represented by a familiar sight on this commemorative coin. Houses in Ostrobothnia were traditionally erected to an imposing height and painted red. A family’s house was modified according to their situation, with extensions and new rooms being added as the family grew. Ostrobothnian houses are considered to represent the pinnacle of folk architecture, and some even see classical and renaissance influences in them.

Each coin also includes the historical crest on the reverse of the province represented. The series was designed jointly by Petri Neuvonen (obverse) and Nora Tapper (reverse). The coins in this series can be purchased individually or in a complete set which will be offered later on this year.

For more information on these and other coins offered by the Mint of Finland, please visit their website at:  http://suomenrahapaja.fi/eng/ Information is offered in English, Finnish and Swedish – international orders fulfilled.