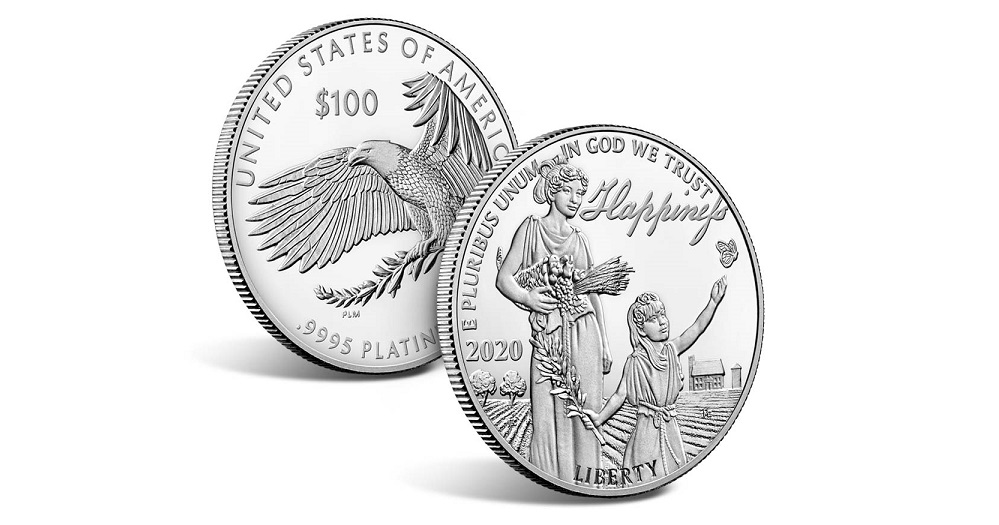 Washington — The United States Mint (Mint) will release the third and final coin in its Preamble to the Declaration of Independence Platinum Proof Coin Series (product code 20EJ) on January 30 at noon EST. The theme of the coin is Pursuit of Happiness.

The obverse (heads) design of the 2020 coin depicts Lady Liberty harvesting the fruits of her labor with a young girl at play nearby. The overflowing cornucopia she carries is a symbol of the physical, intellectual, and spiritual bounty only liberty makes possible—the good things that nourish the body, enliven the mind, and satisfy the soul. The home, orchard, and silo represent American hopes, values, and aspirations and bring to a close the narrative told throughout the backgrounds of the series—from furrowed earth, to prairies and mountains, and finally to an agrarian field. The stubble field alludes to the ingenuity and exertion required to claim liberty’s promise. 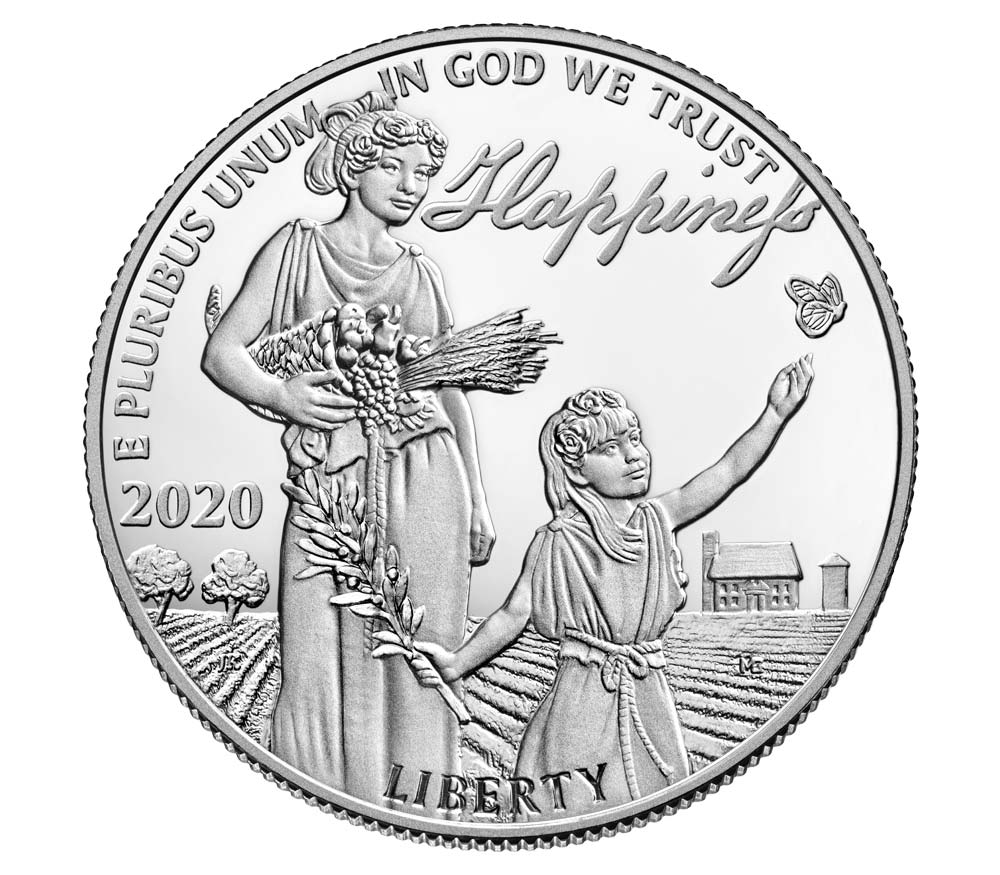 Obverse inscriptions are E PLURIBUS UNUM, IN GOD WE TRUST, Happiness, 2020, and LIBERTY. The inscription “Happiness” is a facsimile of the handwritten word from the Declaration of Independence and includes the long “s,” a letterform that was typical of its time but is no longer in common use. 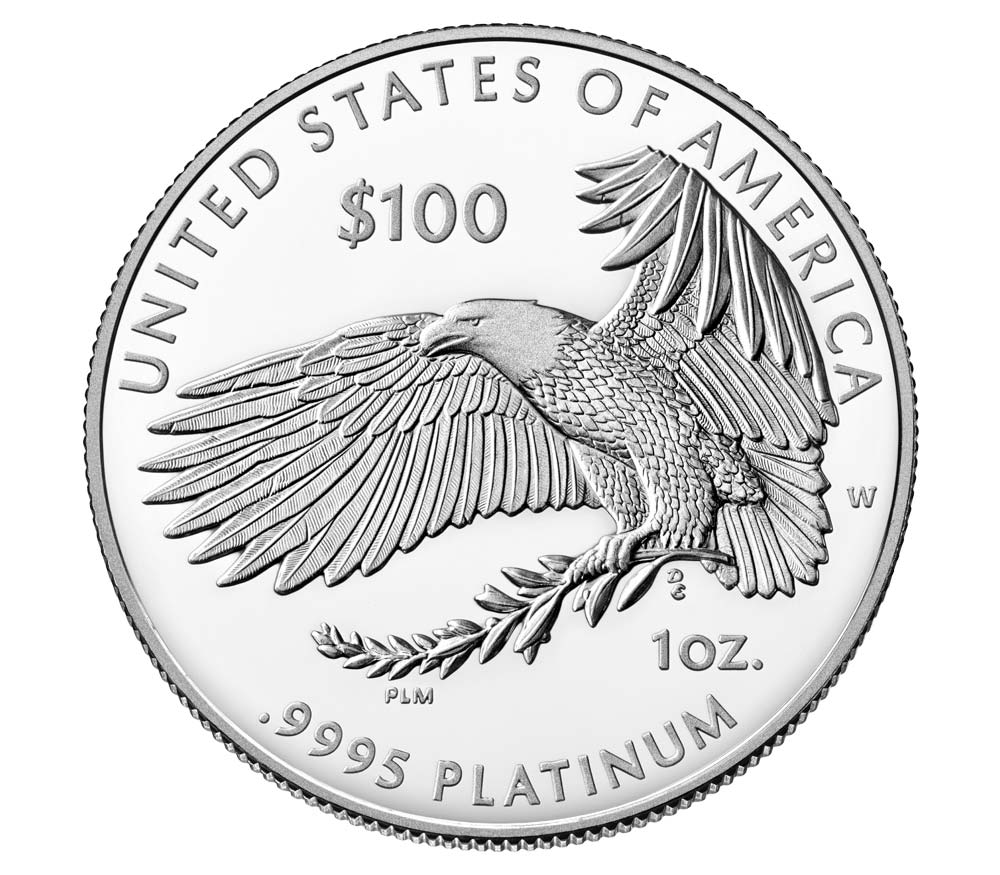 The common reverse (tails) design for coins in this series depicts an eagle in flight with an olive branch in its talons. Inscriptions are UNITED STATES OF AMERICA, $100, 1 OZ., and .9995 PLATINUM. AIP designer Patricia Lucas-Morris created the common reverse design, which former Mint Sculptor-Engraver Don Everhart sculpted. 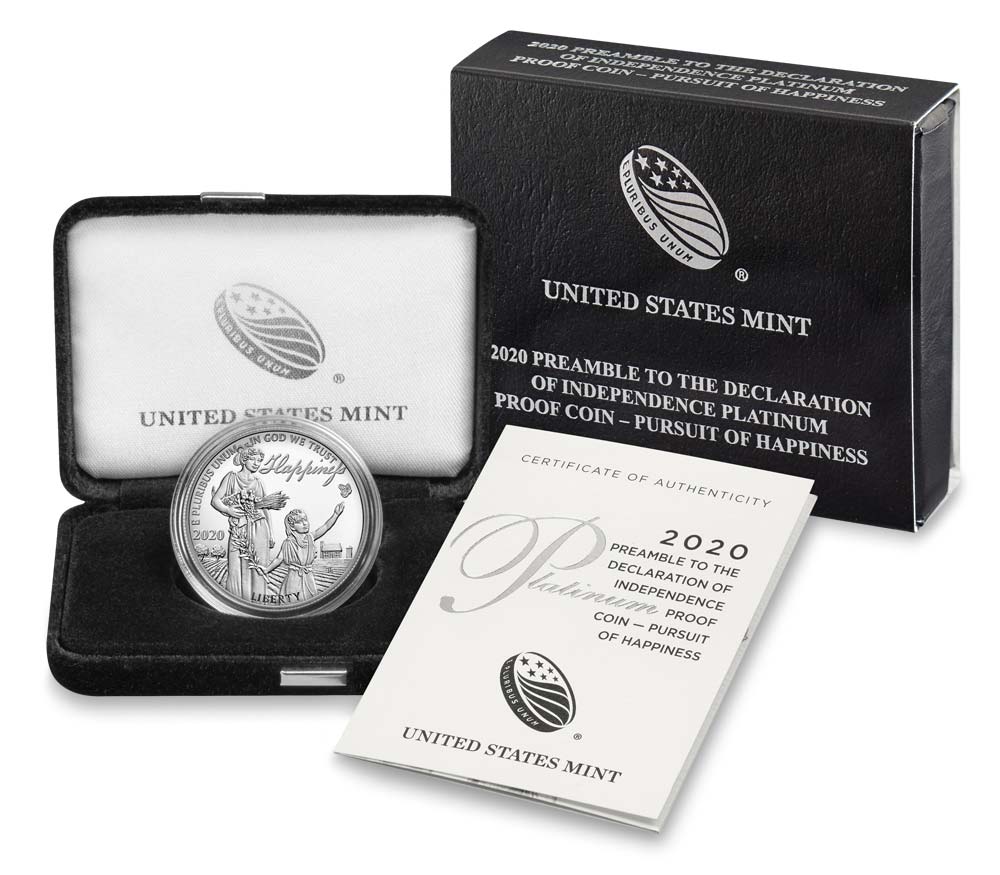 Platinum coins in this series bear the West Point mint mark. Each coin is encapsulated and packaged in a black velvet, satin-lined presentation case that is enclosed in an outer box and sleeve. A certificate of authenticity is included.

The Mint priced this coin according to the range in which it appears on its Pricing of Numismatic Gold, Commemorative Gold, and Platinum Products table. Current pricing information is available online.

Mintage for the 2020 coin is capped at 13,000 units. Orders will be limited to one coin per household for the first 24 hours of sales, after which the Mint will lift the limit. 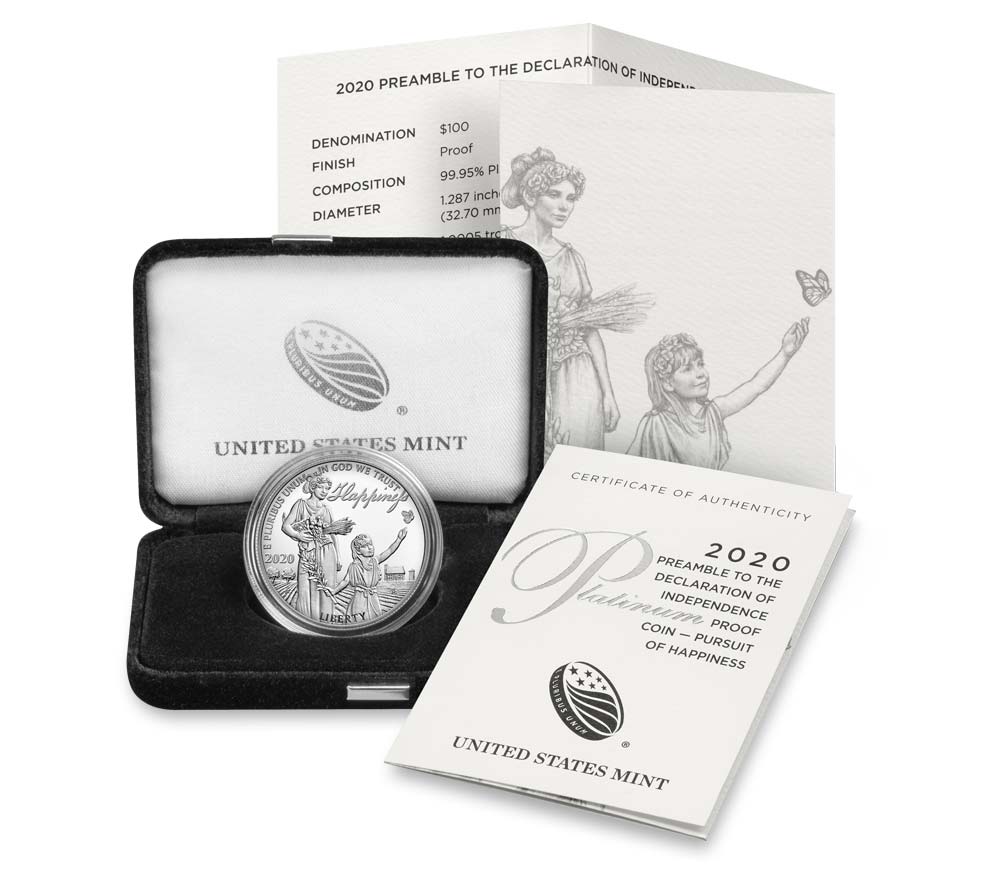 The Declaration of Independence platinum Proof coins can also be purchased at the Mint’s sales centers in Washington, D.C.; Philadelphia; and Denver. Availability may be limited and subject to change. Previously released coins in this series are still available while supplies last.

Congress created the United States Mint in 1792, and the Mint became part of the Department of the Treasury in 1873. As the Nation’s sole manufacturer of legal tender coinage, the Mint is responsible for producing circulating coinage for the Nation to conduct its trade and commerce. The Mint also produces numismatic products, including Proof, Uncirculated, and commemorative coins; Congressional Gold Medals; silver and bronze medals, and silver and gold bullion coins. Its numismatic programs are self-sustaining and operate at no cost to taxpayers.