The Royal Mint has launched (30th April) their third and final Olympic three coin gold series, which is inspired by the Olympic motto “Citius, Altius, Fortius” (Faster, Higher, Stronger). The last series is dedicated to “Stronger” which now completes the series.

The three coin gold set consists of a one ounce coin with a face value of £100 and two quarter-ounce coins of £25. The ‘Stronger’ coin set is one of the most exclusive options to commemorate the forthcoming London 2012 Olympic and Paralympic Games. As an Official Product of London 2012, the Gold Series is the only collection in The Royal Mint’s London 2012 commemorative coin program to feature the iconic five Olympic Rings on every coin. 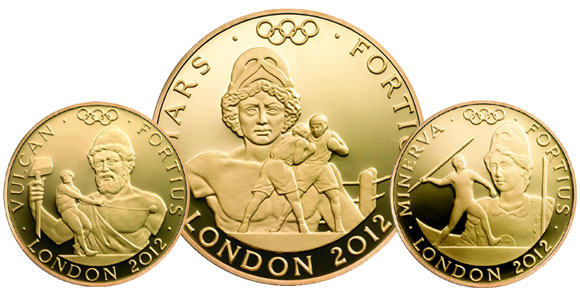 Designed by sculptor John Bergdahl, he has combined both classical and contemporary elements of the Olympic Games. The inspiration for Bergdahl’s designs is the idea of the Roman Gods looking down on their creations, watching the Olympic Games, but only being able to observe, not interfere. The classical heritage of the Olympic Games is combined with modern sporting achievement, each of the three coins in the distinctive ‘Stronger’ collection features a different Roman God reflecting the third strand of the Olympic motto.

Mars, (£100) the God of War, watches over the sport of Boxing; Vulcan, (£25) the God of Fire, overlooks two mortals taking part in the sport of Hammer Throwing; and Minerva, (£25) the Goddess of War, looks on as an athlete throws the javelin. The obverse of each features the classic portrait of Her Majesty The Queen designed by Ian Rank-Broadley FRBS.

For more information on these and other coins offered by the Royal Mint, please visit their website at: http://www.royalmint.com/our-coins/events/london-2012/gold-series