The series has proven popular with collectors and precious metals investors for the well executed rotating designs, which provide an alternative to the static design of the Silver Maple Leaf bullion coins. The limited mintage of one million coins per release has also served to create a premium for some of the earliest releases of the series. By contrast, the Maple Leaf coins have had recent annual mintages in excess of 10 million which leaves little chance for the development of any numismatic premium.

Each coin of the Wildlife series is struck in one ounce of 99.99% pure silver with a diameter of 38 mm and thickness of 3.15 mm. The obverse design for each release has featured the effigy of Queen Elizabeth II designed by Susanna Blunt. The face value of the coins is $5. 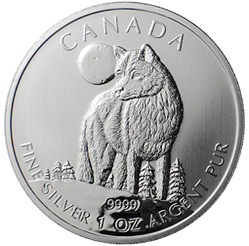 The first design of the series featured a Canadian Timber Wolf standing in a snowy mountain landscape with the full moon appearing in the nighttime sky. The coins were released in September 2010 and carried the 2011 date. This release in particular carries a sharp premium over the silver bullion value. The design by William Woodruff originally appeared on a 2006-dated 1/2 ounce silver bullion coin. 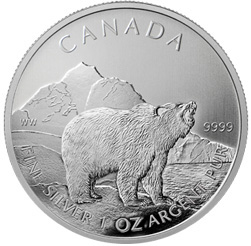 The second release of the series featured the Canadian Grizzly within an arctic landscape. These coins were released in January 2011 and also currently carry a premium. 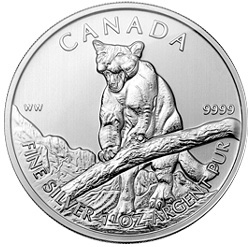 Released in September 2011 and carrying the 2012 date, the third design featured a Cougar. The cougar is in a dramatic pose with its front paws on a fallen tree branch and its mouth open baring its large teeth. 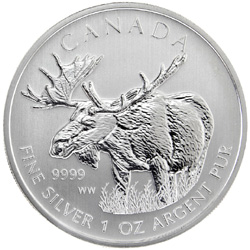 The fourth design of the series featured a majestic Canadian Moose within its native environment. These coins were released in February 2012. Each of the first four designs of the series were designed by William Woodruff. 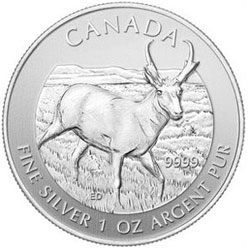 The fifth coin in the series was released in September 2012 and carries the 2013 date. The design features the Pronghorn Antelope in a grassy field. 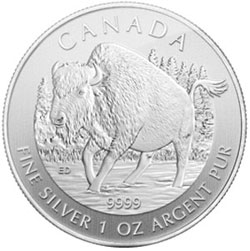 The recently unveiled sixth and final design of the series features a Wood Bison galloping through the snow in a display of strength and endurance. The design was officially announced on February 1, 2013 and many bullion dealers have started accepting pre-orders for the coins. Both the fifth and sixth coins were designed by Emily Damstra.