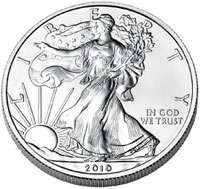 The US Mint sold 84,000 ounces of gold bullion for the month through the one available option. This is down just slightly from the 85,000 ounces sold last month, but down more significantly from the year ago period February 2009 when 113,500 ounces were sold. The United States Mint continues to sell both 2009 and 2010 Gold Eagles. Authorized purchasers are required to take one 2009-dated coin for every three 2010-dated coins until the US Mint clears the remaining inventory.

Sales of silver bullion coins dropped to 2,050,000 ounces. This is compared to last month when more than 3 million ounces were sold, representing the highest monthly sales total since 1986. In the year ago period February 2009, the US Mint had sold 2,125,000. The US Mint is currently selling only 2010 dated coins. The final inventory of 2009 dated coins was sold out prior to the start of sales for the 2010 Silver Eagles. The year to date sales through the end of February now stand at 5,642,500.