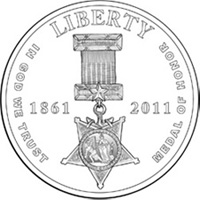 The month of February 2011 will start with the Long Beach Coin & Collectibles Expo. There will be more than 1,000 dealers buying and selling rare coins, paper money, stamps, and other collectibles. Coin grading companies PCGS and NGC will be available for on-site grading.

The 17th issue in the ongoing Presidential Dollars series will be released this month. A launch ceremony will be held at the Andrew Johnson National Historical Site in Greeneville, Tennessee, with numismatic rolls available from the United States Mint later in the month. The coins will also be issued for general circulation. The special ordering period during which financial institutions can order unmixed quantities of the new design runs from January 27- March 3.

Several US Mint numismatic products will make their debut this month. Early in the the month, the 2011 Mint Set will be released. This set will feature coins with a brilliant finish, which is a change from the satin finish used in recent years. The 2011 Kennedy Half Dollar bags and rolls will be available starting February 15, 2011. This denomination is not issued for circulation, but only available through numismatic offerings.

To finish the month, the 2011 Medal of Honor Commemorative Coins will go on sale. This is one of two commemorative coin programs for this year. It features $5 gold coins and silver dollars to mark the 150th anniversary of the Medal of Honor and recognize and celebrate its recipients.