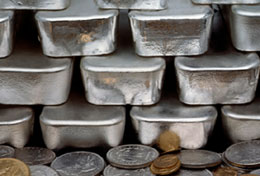 For years, I have heard stories of Chinese citizens waiting in line up to four hours to be able to make purchases at gold buying stores. Lately I have heard similar observations from our customers who have visited other Far Eastern countries.

One problem has been the lack of local refinery capacity to produce sufficient ingots to meet demand.

Some new gold refineries have just opened in China. Since the spot price of gold dipped below $1,400 they are having so much difficulty obtaining physical gold to process that gold premiums in China have soared. On January 11, premiums in the Shanghai market reached almost 1.3% above the world price. This is the highest premium in the Chinese market since the end of 2008 after the price of gold had plummeted down to the $900-1,000 range!

Beyond gold, it is possible that China may be acquiring a huge physical silver position as well. An analyst who is hiding behind the name of The Golden Economizer has recently published two speculative articles.

The author admits that the markets are not transparent enough to provide confirming information, but he makes some conjectures that seem eminently sensible to me. So, keep in mind that the following scenario is plausible, but cannot be taken as established fact.

China has three motives for purchasing physical silver. First, it would be an excellent way to unload some of that country’s hoard of US Treasury and other debt (especially Fannie Mae and Freddie Mac). Second, China may be trying to accumulate a huge hoard of precious metals to possibly use them to back the renminbi yuan currency in the future, a step that would push China’s currency to world prominence. Third, China has growing needs for all commodities for industrial fabrication purposes, including silver.

China also has the opportunity to acquire huge amounts of physical silver because it does have the financial reserves to pay for it. However, the author speculates that it could be possible that China may be engaged in a more sophisticated trading pattern. For instance, China could establish a huge long position on the COMEX silver market working with one bank such as JPMorgan Chase while at the same time building an equal offsetting short position on the COMEX through another bank such as HSBC. Holding balanced positions would minimize pressure for higher prices. Then, as the long contracts mature, they could be held for delivery of physical metal. As the short contracts mature, they could be replaced with other short contracts that mature further into the future.

The flaw in this theory is what happens to the short silver position if the price of silver soars. Well, China has been known to be a bully when markets go against them. A few years ago China signed long term contracts to buy iron from Australian companies. When the world price of iron fell more than 50% from the contract price, China demanded that the contracts be renegotiated. The threat behind the demand was the risk of default on the existing contracts and then refusal to ever again deal with the Australian companies (for whom China was their major market).

Last, the author also theorizes that China may have demanded delivery of a large number of maturing COMEX silver contracts in late 2010, but agreed to instead accept cash payments at above spot-market prices. When the September 2010 contracts matured, 84% of the contracts standing for delivery were settled by delivery of metal or payment in cash rather than being offset by the purchase of a short contract—an unusually high percentage. If this is true, there would be an incentive for the Chinese to cooperate in the suppression of gold and silver prices in early 2011 so that they could cover some of their short positions at profitable prices. Further, that also would indicate a very real possibility that there could be a severe supply squeeze in the COMEX silver markets when the March 2011 contracts mature in late February.

As I said, this is a reasoned speculation about possible Chinese trading activity in the absence of facts to prove or disprove the theory. Even if it is not accurate in all respects, there is certainly strong demand for physical gold and silver in the Far East that will put substantial pressure on the COMEX and London markets in the coming months. The beginning of 2011 should be very interesting for the gold and silver markets.