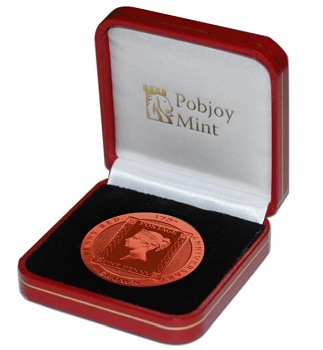 The Government of Ascension Island has issued a new crown coin featuring one of Great Britain’s more well-known stamps of the 19th century: the “Penny Red.” Penny Red stamps were issued in the United Kingdom from 1841 and enjoyed a substantial stretch of use all the way until 1879 — an astonishing 38-year issue run.

The issue of the “Penny Red” coin celebrates the 175th anniversary of the release of the stamp of the same name. Based on the earlier “Penny Black” stamp, which ushered in the age of reliable and daily postal service, the color of this denomination was changed from black to red because of the difficulty of seeing a cancellation mark on the Penny Black; the red made this mark much more visible. The Penny Red was essentially introduced to combat fraud, but continued to be the main type of postage stamp in the UK throughout its period of issue.

The statistics surrounding the stamp are not short of highlights. It was printed in a quantity exceeding 21 billion, and was the world’s most used stamp in the early classic period. It was also Britain’s longest-running stamp issue in everyday use, and remains possibly the country’s most collected and best studied. The stamp included a diademed portrait of Queen Victoria, with the one-penny value of the stamp placed just under the portrait.

In 1990, with the release of the Penny Black crown, the worlds of numismatics and philately were uniquely brought together as never before. The 1990 coin proved exceptionally successful, as did many coins issued later featuring special stamps. The Penny Red Stamp coin now joins this extraordinary series of world famous stamps on coins. 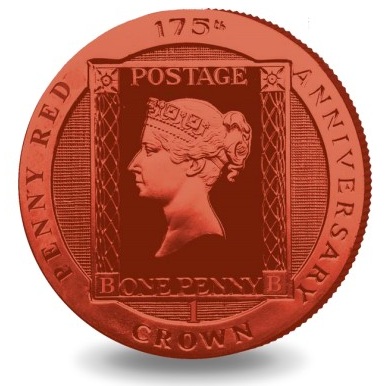 The coin is produced by the Pobjoy Mint UK on behalf of the Government of Ascension Island and includes a perfectly reproduced Penny Red stamp on the reverse on the coin. It has been produced with a beautiful Pearl-effect red finish. 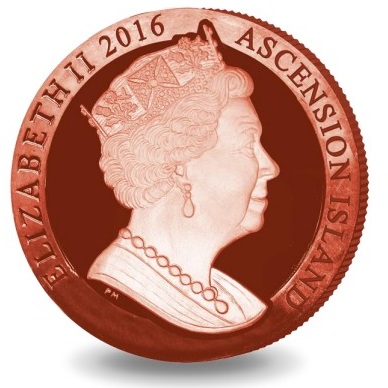 The obverse of the coin carries a special incused effigy of Her Majesty Queen Elizabeth II; this portrait’s use is exclusive to the Pobjoy Mint.

The coin is available in red cupro nickel (BU) and red sterling silver (Proof). Both the cupro nickel and the silver coins are shipped encapsulated in an acrylic capsule for protection, and housed in a red box with a certificate of authenticity. For more information on this and other coins on offer by the Government of Ascension Island, please visit the Web site of the Pobjoy Mint. International orders will be dispatched where applicable.