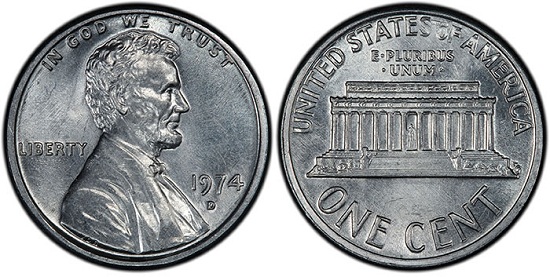 The U.S. Mint has obtained an extremely rare aluminum Lincoln cent struck at the Denver Mint in 1974.

The coin had been in the possession of Randall Lawrence, whose father Harry Lawrence served as Deputy Director of the Denver Mint until his retirement in 1979. Randall Lawrence inherited the coin after his father’s death and eventually sought to have it sold at auction in 2014.

Lawrence partnered with Michael McConnell of La Jolla Coin Shop in Southern California, and submitted the cent to PCGS for grading. It received a grade of MS-63 and was exhibited at the Long Beach Coin, Currency, Stamp & Sports Collectible Expo shortly afterward. According to Lawrence and McConnell, auction estimates for sale of the coin were as high as two million dollars.

Upon hearing news of the coin and its impending sale, the U.S. Mint requested that it issue be returned, as it was never authorized to be removed from the Denver facility. A Mint press release says that, “the United States Mint never issued, nor otherwise transferred title to any aluminum one-cent piece, and that indeed, lawful authority to issue them was never granted. Congress never divested the Government’s interest in the subject aluminum one-cent piece, and accordingly, it remained the rightful property of the Federal government.”

Lawrence responded that the coin had been given as a retirement gift to his father, and filed a lawsuit with McConnell seeking to establish lawful ownership of the coin.

Yesterday, a statement from the U.S. Attorney’s Office provided an update on the litigation, which came to a close as Lawrence made the decision to return the coin to the Mint. “By the terms of an agreement to end the litigation that they brought against the United States, Mr. Lawrence and Mr. McConnell have voluntarily relinquished all claims of ownership, legal title, or dominion over the 1974-D aluminum one-cent piece to the United States,” the release stated. “The piece was transferred to the custody and control of the United States Mint for its use and display as it may determine.”

The Mint’s Principal Deputy Director Rhett Jeppson said of the result, “The Mint is very pleased with the agreement, and we are very grateful to the U.S. Attorney’s Office in San Diego for its work and efforts in reaching this resolution. We look forward to displaying the coin appropriately as an important Mint heritage asset. This agreement is not only good for the integrity of the coin collecting hobby but for the integrity of the government property and rule of law.” 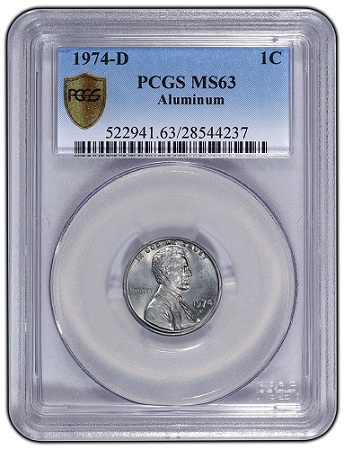 The aluminum cent was likely struck as part of a wider experiment carried out by the Mint in the 1970’s. Dr. Alan Goldman served as interim Mint Director around time the coins were minted and oversaw an aluminum cent project at the time. “I knew Harry Lawrence very well and he was a straight shooter,” he said in a deposition. “He would not have engineered this.”

La Jolla Coin Shop owner Michael McConnell first purchased the coin from the younger Lawrence for a modest price in 2013, thinking the cent was a merely struck on a foreign planchet. After PCGS confirmed it was an authentic 1974-D aluminum cent, however, McConnell felt compelled to get in touch with Lawrence and give him the news. “I wouldn’t be able to sleep without notifying him,” he said.

Now that the coin has been returned, Lawrence seems to have made peace with the outcome. “I know my father would be pleased that others will get to see and enjoy this rare piece in the U.S. Mint’s collection for years to come,” he said.

Tom Jurkowsky of the U.S. Mint told Coin World that the Mint is currently authenticating the coin and will confer on available options to display it in the future.