November is rapidly approaching, and that means it is time for the final Whitman Expo of the year, held in Baltimore, Maryland. Taking place November 9 to 12, Stack’s Bowers will be organizing several auctions of United States coins and paper money. In this first of two preview articles, we will take a look at some of the coins on offer during Rarities Night, which will be held November 9 at 5:00 p.m. EST. In another article, we will take a look at some of the other highlights from the various sessions. All lots discussed in this article, as well as all other items on the auction block this week, can be viewed in detail on the website of Stack’s Bowers. 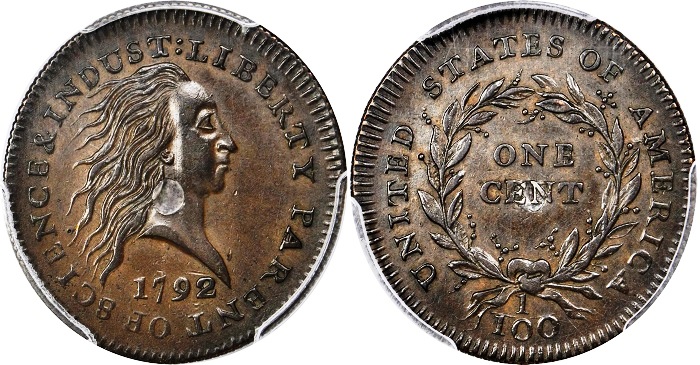 For our first lot, we go back to the earliest days of the United States Mint, less than two decades after the Declaration of Independence and the Revolutionary War. Lot 10003 is one of what is believed to be just 14 extant examples of the 1792 silver-center cent, a copper coin that included a small silver plug in the center of the planchet. Graded MS-61 BN by PCGS, this is one of the earliest experiments for a uniform coinage for the young nation. Technically considered patterns, as these were not produced in large enough quantity to support circulation, they are still considered an integral part of early American numismatic history — and demand for any of the surviving pieces is high. The piece offered by Stack’s Bowers is among the finest known of this rarity and should see spirited bidding when it crosses the auction block. 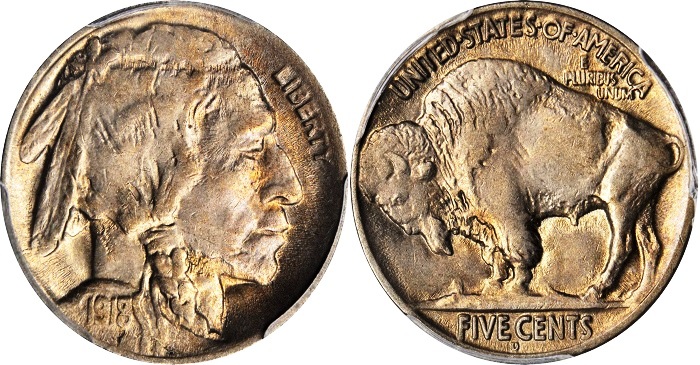 We take a jump of well over a century now as we take a look at lot 10024, a PCGS AU-58 CAC example of the 1918/7-D Buffalo nickel. One of the few major varieties in this very popular series, this variety from the Denver Mint showcases a strong overdate, with the remnants of an initial 7 clearly visible below the 8 in the date. It is believed that this variety was not discovered by numismatists until over a decade after minting, at which point the majority of coins had spent a long time in circulation, and had been worn down, damaged, or lost in the process. The survival of any high-grade example was just one of mere chance, and to this day most survivors are in low grades. While they do exist in Uncirculated condition, they are very seldom offered for sale, and even circulated examples at the VF or EF level with good eye-appeal are very difficult to find — making this an important opportunity for the Buffalo nickel specialist. 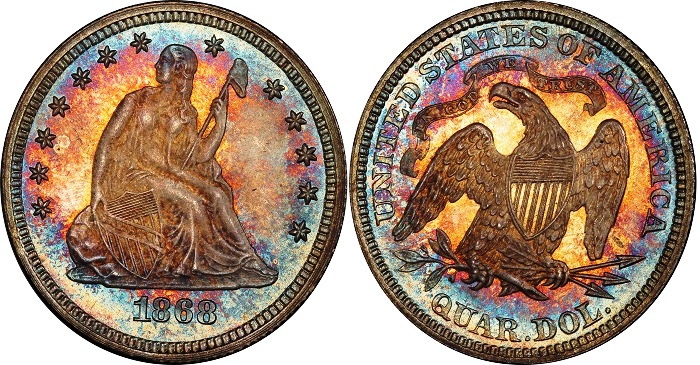 The Liberty Seated series, minted for an extended period of time during the 19th century, is filled with rarities regardless of denomination. Especially the second half of the 1860s, right after the American Civil War, contain some very low-mintage dates that are quite difficult to find. The 1868 quarter is such a coin, with a mintage of just 29,400 pieces for circulation, plus a small number of Proofs for collectors. Lot 10051 in Stack’s Bowers’ Baltimore sale is what is probably the finest known circulation-strike example of this rare date, graded MS-66+ by PCGS and approved by CAC. A coin with magnificent eye-appeal, it must have been set aside at the time of issue, whether by chance or on purpose, which now gives advanced collectors a chance to add this Liberty Seated rarity (and one of the most appealing examples of this type your author has ever seen) to their collection. 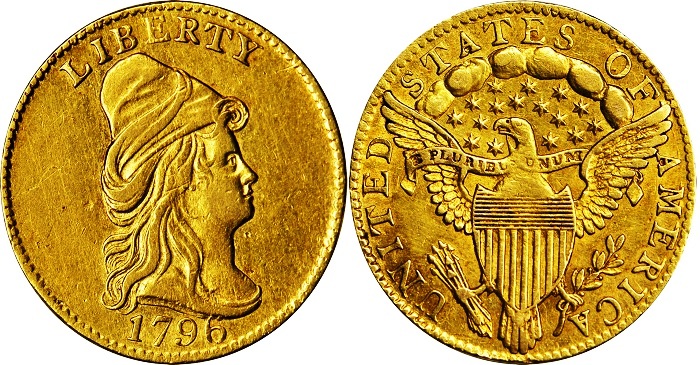 Gold coins were first struck at the United States Mint in Philadelphia in 1795 ($5 and $10 gold pieces), and the following year $2.50 gold pieces, or quarter eagles, were added to the assortment. For many years, this was the smallest gold coin struck at the United States Mint (gold dollars would not be introduced until 1849). The initial year saw two distinct varieties struck for circulation: one without obverse stars and one with obverse stars, the latter of which would set the standard for the following years. The variety without obverse stars saw just 963 pieces struck for circulation, and this is one of the rarest types of United States coinage. The variety with obverse stars that year saw an even smaller mintage, but it was also struck the following few years, giving type collectors more opportunities to acquire it. Lot 10114 in the Stack’s Bowers galleries offers a PCGS AU-53 graded example of this classic rarity. Light wear from circulation is seen on both sides, but all design features are sharp, and for an advanced type- or gold-coin collector, the coin offered by Stack’s Bowers makes for a wholesome and high-quality example of the earliest quarter eagle. The final lot in this auction that we will take a look at is another gold coin rarity. Lot 10207 is a PCGS AU-55 graded example of the 1861-O double eagle. Struck during the last days of the New Orleans Mint prior to its closing for 18 years, this type was famously struck by three governments (much like the Liberty Seated half dollar of the same year): the U.S. federal government, the State of Louisiana, and the Confederate government. The three governments struck double eagles using a single die pair, with a total output of 17,741 coins, all of which were quickly released into circulation. While research on this issue is not complete, it is believed that the earliest die state of this die pair (such as the coin on offer by Stack’s Bowers) was part of the 5,000 coins struck by the federal government before the outbreak of the American Civil War. More details on this can be found in the auction description, which is worth a read if you are not familiar with the history of the New Orleans Mint. Examples are rare in all grades, but particularly in AU or better, as with the example offered by Stack’s Bowers in Baltimore.