On September 15, the Falkland Islands issued a colorful tribute to the territory’s head of state, Queen Elizabeth II, on the occasion of her 90th birthday; she is the first monarch of the British Isles to achieve this milestone. 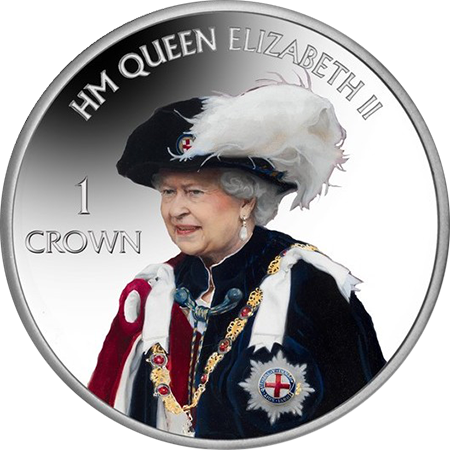 The coins are struck in gold and silver and are produced by the Pobjoy Mint on behalf of the government and treasury. The reverse design depicts Her Majesty in the robes of the Order of the Garter, a centuries-old chivalrous order with roots dating back to 1348 (scroll down for more on the history of the order). Each precious-metal coin is struck four times to achieve an outstanding Proof finish. 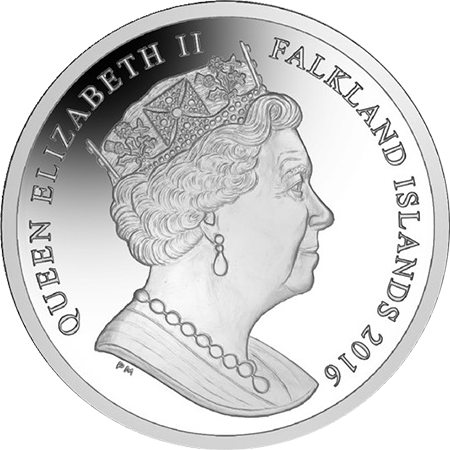 The obverse of the coin depicts an effigy of the Queen that was introduced last year and is exclusive to the Pobjoy Mint.

The mintage of the one-ounce sterling silver Crown coin has been set to match the Queen’s year of birth, 1926. The mintage for the one-ounce gold Proof is just 62 pieces, representing the number of gun salutes that take place at the Tower of London to commemorate the Queen’s birthday every year.

The coins are shipped in an acrylic capsule for protection and housed in a custom red box with a certificate of authenticity. For more information on this and other coins issued by the Falkland Islands, please visit the website of the Pobjoy Mint. International orders dispatched where applicable.
Share:

Elizabeth II and the Order of the Garter

Elizabeth (baptized Elizabeth Alexandra Mary) was born in London on April 21, 1926. The eldest daughter of the Duke and Duchess of York, she was the first grandchild of King George V. At the time of her birth, she was third in the line of succession to throne; she was never expected to actually reign, since her uncle Edward, Prince of Wales, was ahead of her father and had yet to marry and produce heirs. The death of her grandfather in January 1936, followed by the abdication of her uncle in December that same year, thrust the 10-year-old into the role of presumptive heir to the new king, George VI, her father.

In February 1952, at the young age of 25, Princess Elizabeth did indeed succeed her beloved father, who died unexpectedly of an illness that had been mostly hidden from the public. She received the news as she and her husband, the Duke of Edinburgh, were on their way to Australia to represent her father on a royal visit. They returned to London immediately, and the moment she stepped foot back on British soil, she was received as the sovereign by the prime minister and the Archbishop of Canterbury.

The portrait on the new Falkland Islands coins depicts the Queen wearing the robes of the Order of the Garter. Appointed to the order by her father in 1947, the Queen attends the annual service as Sovereign of the Order. Other members of the royal family in the order also attend, including the Duke of Edinburgh, the Prince of Wales, and the Princess Royal.

The Most Noble Order of the Garter was founded by King Edward III; it is the highest order of chivalry and the United Kingdom’s third-most-prestigious honor, inferior only to the Victoria Cross and George Cross. The image on the coin, based on an original photo by award-winning British artist Alastair Barford and approved by Buckingham Palace, depicts the Queen as she is often seen during the annual procession of holders of the order.

During the Middle Ages, ladies could be associated with the order but did not enjoy full membership. In 1987, however, the Queen decided that women should have the same eligibility as men.