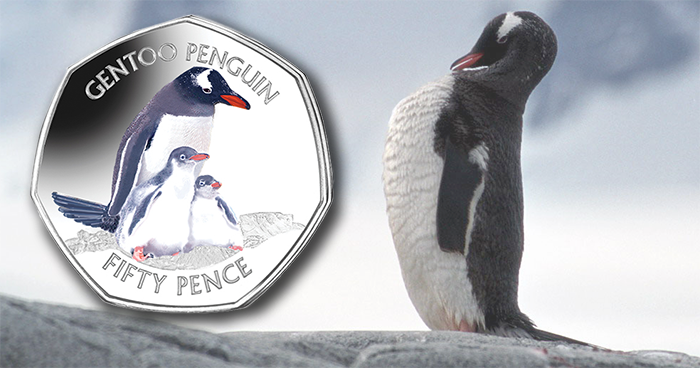 The government and Treasury of the Falkland Islands have issued (20th June) their second coin as part of the very popular “Indigenous Penguins” coin series, which features full-colour renditions of the islands’ more numerous inhabitants. The Falkland Islands refer to themselves as the “penguin capital of the world,” as more than one million penguins nest on the islands. Their geographic placement off the tip of South America, not too distant from the coast of Antarctica, means they provide an ideal location for these extraordinary birds to live, breed, and raise their young. The arctic region is the only place where you will see a penguin, although only two species of this flightless bird actually make their home on the southern-most continent. The penguin has evolved over a substantial span of time to adapt to such harsh weather and atmospheric conditions—however, this evolving process has made them very adept at swimming in water rather than flying across the skies.

The second coin in the series features the gentoo penguin, which is one of three species in the genus Pygosceli found on the Falkland Islands and around the Antarctic. This species is recognisable by a white strip across the top of its head and a bright orange bill. It also has one of the largest tails amongst all penguin species. The penguin is renowned for its waddle and its sweeping tail that moves side to side when it walks. (Its scientific name actually translates to mean “rump-tailed.”) Gentoo penguins grow quite large and are actually the third-largest species, with the male gentoo reaching a height of 90 centimetres (35 inches) and a weight of about 8.5 kilograms (18 pounds). They sustain themselves primarily on a diet of krill, crustaceans, and fish, which they catch with ease due to their top swimming speed of an impressive 22 miles per hour. It is estimated that the current population of the gentoo is around 300,000 breeding pairs, so they are not classified as endangered; however, some populations have fallen by around two-thirds over the last 25 years. Predators of the gentoo include sea lions, leopard seals, and killer whales. They also have their eggs stolen by hungry seabirds. 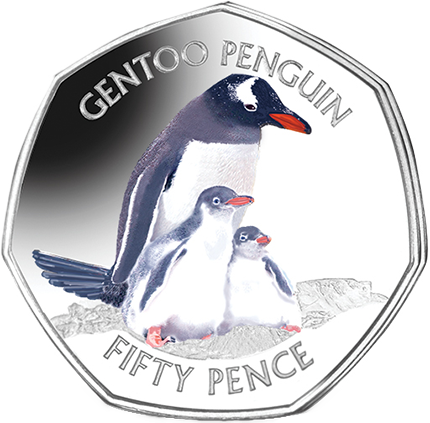 The coin is produced by the Pobjoy Mint, United Kingdom, on behalf of the Treasury of the Falkland Islands. The reverse of this seven-sided coin features an adult gentoo penguin cuddled up with its two chicks. Sitting on a rocky mountain outcrop, where they like to nest, the cute trio make a heart-warming image. Above the penguins on the plain field are the words GENTOO PENGUIN; below is the denomination, FIFTY PENCE. 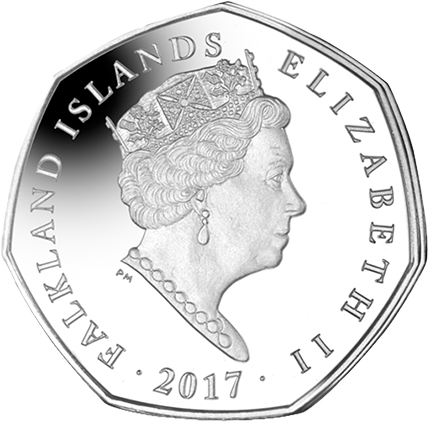 The obverse features an effigy of HM Queen Elizabeth II which is an exclusive design to the Pobjoy Mint. The year of issue, 2017, is placed just below the Queen’s portrait; the legend FALKLAND ISLANDS ELIZABETH II surrounds the effigy.

The Treasury of the Falkland Islands have announced that this series will consist of four different designs. The next two coins will be issued in August and October of 2017. As part of the presentation, a collector’s folder has been produced to unite the four coins: 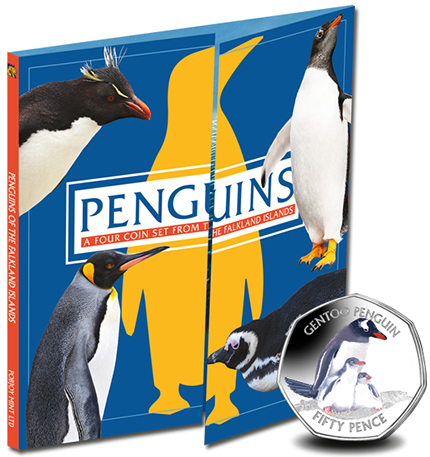 If purchased individually, the coin is enclosed in a blue pouch; if purchased with the folder shown above, the pouch is not included. Please visit the website of the Pobjoy Mint for additional information on this and other coins issued by the Treasury of the Falkland Islands. Orders dispatched from the 21st June.   ❑