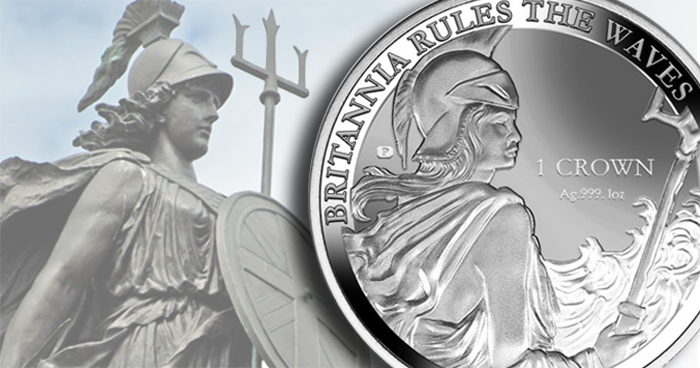 The government and Treasury of the Falkland Islands have issued (13th June) a new silver bullion coin which features the most well-known symbol of the ruler of the waves. She is Britannia, and her likeness graces the islands’ newest crown coin.

Britannia’s name was actually the Latin name given to the lands of Great Britain in 43AD when it was occupied by the Romans. She was then personified and turned into a goddess, whose original bare-breasted, spear-wielding figure has appeared on coins from the second century until the modern day. Her image has undergone many styles and interpretations, but she has always personified independence, sovereignty, and strength, epitomized by her rule of the waves. This reputation grew as the English and British navy grew in stature and prominence over the centuries—bringing trade, settling outposts, and eventually building an empire greater than that of the Roman Empire which included most of the known world.

The patriotic British song “Rule, Britannia!” originated from a poem of the same name written by James Thomson and set to music in 1740 by Thomas Arne. The song (which can be played in the YouTube video below, with lyrics shown) has always been strongly associated with the Royal Navy.

This new coin has an especially poignant resonance to the Falkland Islands at this particular time, with the 35th anniversary of the liberation of the Falkland Islands by British forces. The long-running dispute between the United Kingdom and Argentina over the ownership of the Falklands was brought to a head on the 19th March 1982, when 50 Argentines landed on South Georgia Island and hoisted their flag. Under the order of Leopoldo Galtieri, then-president of Argentina, the invasion of the Falkland Islands was declared on the 2nd April, which triggered the start of the war. The coin is also issued in remembrance of this anniversary and the association with the Royal Navy as well as the important part they played in the conflict. Britannia is a particularly strong British national emblem and the words from the song “Britannia Rules the Waves” are particularly heartfelt in relation to the Falklands Liberation anniversary, which is observed each year on the 14th June. 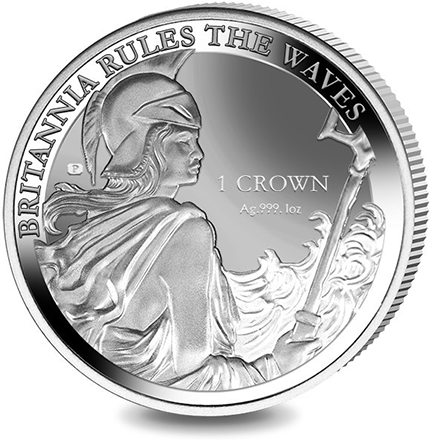 The coin is produced by the Pobjoy Mint, United Kingdom, on behalf of the Treasury of the Falkland Islands. The reverse features the grand lady Britannia, the female personification of the British Isles who is seen as a symbol of British unity, liberty, and strength. She is shown in the foreground holding a trident, with the waves of the sea crashing in the background. Above, on the plain, surrounding border, are the words BRITANNIA RULES THE WAVES.  The denomination, 1 CROWN, appears on the field to the right of the figure, with the metal, fineness, and weight—Ag.999.1oz—in smaller characters below. 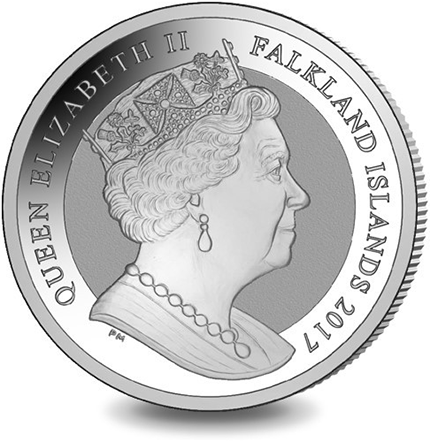 The Britannia bullion coins are presented in individual capsules, which are enclosed in clear, heat-sealed packs containing the required quantity. The single coin is also presented in an individual heat-sealed pack. For more information on these and other coins issued by the Treasury of the Falkland Islands, please visit the Pobjoy Mint’s website.   ❑