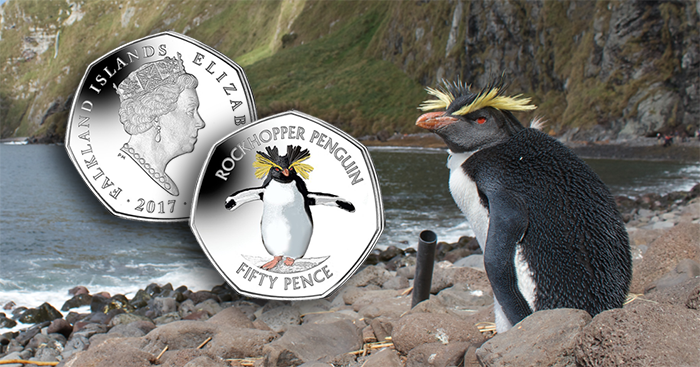 The Treasury of the Falkland Islands government have launched (7th April) a new series of coins that highlight one of the Island’s most well-known and beloved residents belonging to the animal kingdom: the penguin.

Penguins are found only south of the equator, close to the arctic pole in areas favouring coastal habitation or on the many islands surrounding the continent of Antarctica or adjacent. The Falkland Islands are a mere 750 miles off the nearest point of Antarctica, and it is there that many penguins make their home. In fact, the Falkland Islands refer to themselves as the penguin capital of the world, as more than 1 million penguins nest on the islands at any given time.

The first coin in this colourful and insightful series depicts the rockhopper penguin (Eudyptes chrysocome), a remarkable creature reaching about half a metre tall and weighing no more than 2.7 kilograms (6 pounds). These tiny penguins take their name from the rocky shorelines where they nest in tall grasses called tussocks. In general appearance, the rockhopper looks similar to other penguins, but it is easily distinguishable by the spiky, black-and-yellow plume upon its head. Upon closer observance, one can see a few other differences, including red eyes and pink webbed feet.

Indigenous to the Falklands, these rockhopper penguins live on a diet of krill and small crustaceans, and they sometimes go hunting for days at a time. They can dive to depths of 100 metres (330 feet) to catch their prey and stay down for several minutes without taking a breath. When rockhoppers come back to shore they often have to navigate their way up the face of a cliff by climbing or by riding a wave to try to land at the top. This can be incredibly dangerous for the penguin, as sharp rocks and pounding waves can maim and even kill. Despite the rockhopper’s being one of the world’s most numerous penguins, since the early 20th century their numbers have decreased by a staggering 90%, and they are now considered “vulnerable.” This is most probably due to human activity such as overfishing and pollution damaging their food supply. 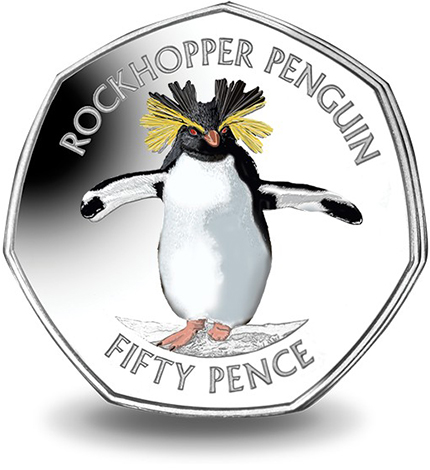 The set of 4 seven-sided 50-pence coins depicting indigenous penguins are produced by the Pobjoy Mint, United Kingdom, on behalf of the Treasury of the Falkland Islands. The reverse features an adult rockhopper with its signature hairstyle, depicted with its wings raised, poised in a position a penguin takes before it hops. The inscription ROCKHOPPER PENGUIN is placed above the design, and FIFTY PENCE below. 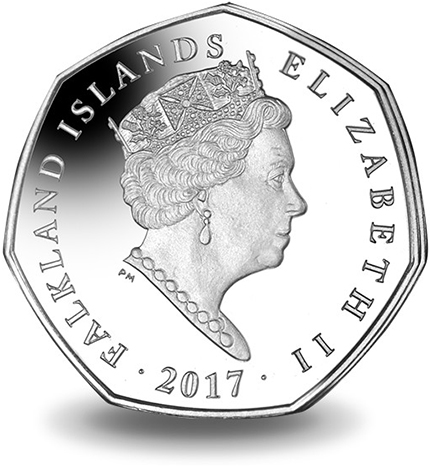 The complete set will include a total of four coins issued during 2017; delivery of the first coin commences on the 24th April. The schedule for the rest of the series is as follows: gentoo penguin in June, king penguin in August, and Magellanic penguin in October. A collector’s folder, which includes colourful graphics and interesting facts about the penguins, will also be available to hold the set.

Please visit the website of the Pobjoy Mint for more information on these and other coins issued by the government and Treasury of the Falkland Islands.   ❑
Share: